The smell of solid gold fills the air in Hollywood this morning as a handful of artists will be carrying their (Probably heavy) Grammy Awards from last night. There will also be the faint smell of disappointment as many of Hollywood's heavyweights walked away empty handed. Grammy night belonged to Daft Punk and Macklemore. The former, an example of how to really make a come back after several years of relative quietness. The latter, a clear indicator that brains and musical talent still exist in mainstream music. Many big names will have been disappointed not to take anything home last night- perhaps as clear a sign as anyone needs that the music industry is in its most unpredictable era at this point in time.

The Grammys are always exciting, always full of surprises and, more often than not, always a talking point the following day. A quick Twitter or Google Search will show you that that's all anybody is talking about at the moment and with that in mind, we're going to break it down and reveal who would have been happy with last night's outcome, and who will be smarting after being "snubbed" or left out.

Who had a good time at the 56th Annual Grammy Awards?

Daft Punk were last night's biggest winners. The French duo walked away with the highly coveted Album of the Year award for their transcendent record, Random Access Memories. They scooped another 3 awards including Best Electronica/Dance Album for the same album, as well as Best Pop/Duo Performance, and the Holy Grail of the Grammy awards, Record of the Year, for their smash hit, Get Lucky. 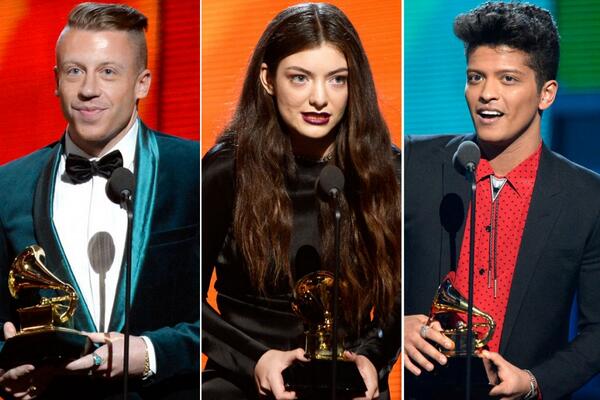 Macklemore and Lorde won't be feeling too sad this morning, receiving an impressive four and two awards respectively. Macklemore dominated the rap categories, winning the Best Rap Album (The Heist) and Best Rap Song (Thrift Shop) as well as the Best Newcomer Award and the Best Rap Performance award. Lorde, the New Zealand born 17 year old singer, picked up Song of the Year and Best Solo Pop Performance for her track, Royals.

Justin Timberlake picked up 3 Awards on the night, two of them for collaborations with Jay Z (Suit and Tie as well as Holy Grail) and an award for Best R&B song for his Pusher Love Girl.

Bruno Mars, Imagine Dragons and Zedd all picked up awards in the Pop, Rock and Dance/Electronica categories respectively- handsome achievements for each of them.

Who won't be happy after last night's Grammy Awards?

Kanye West. Well, he wasn't happy about only receiving 2 nominations; he'll be less than impressed after walking away from the Grammys empty handed. In fact, a lot of rappers will be feeling underwhelmed at this point in time. Kendrick Lamar will surely be lamenting a disappointing evening- the rapper didn't win a single award despite racking up an impressive 7 Grammy Nominations (Though the text below from Macklemore might make him feel better!) Likewise, Jay Z, despite sharing two awards with Justin Timberlake, didn't make the most of his 9 nominations on the night.

Robin Thicke, despite an impressive 2013, will be disappointed to not have won anything on the night. The singer's catchy single, Blurred Lines flew under the radar on the night and was trumped by Daft Punk's Get Lucky.

You'll notice that Miley Cyrus doesn't get a mention. She was undoubtedly music's biggest talking topic in 2013, however when the nominations were announced in December, Miley wasn't given the nod in any category. We're pretty sure she'll have been watching the awards ceremony last night and feeling she could have been in amongst the winners.

We have a list of all of the Grammy Winners below. Who do you think should have taken the prizes this year? Leave us your thoughts in the comments section!

27. Best Country Duo/Group Performance: "From This Valley," The Civil Wars

48. Best Blues Album: "Get Up!" Ben Harper With Charlie Musselwhite

49. Best Folk Album: "My Favorite Picture Of You," Guy Clark

68. Producer of the Year, Non-Classical: Pharrell

AKA Is Ready To Drop Bhovamania's EP