Its crunch time in the Big Brother house and the tensions is higher than ever as the number of housemates grows smaller with each eviction. becoming few. Leaving the house with a lifetime of memories although we all know that the one thing they would’ve loved to leave with is that grand cash prize that has slithered through their hands.

This week’s eviction hit home for us as one of our own countrymen, Samantha from Potchefstroom was evicted alongside Malawian TV presenter Mr 265.

We sunk our claws into the evictees to hear about their experiences in the infamous Big Brother house, starting off with Samantha:

In a parallel universe what’s the worst thing you could’ve done in the house to ensure your stay was longer?

I really don’t consider myself a bad girl so it’s really hard for me to think of something scandalous that I would’ve done in the house. But the one thing I know about me is that I’m very opinionated, however this time around when conflict came my way I shied from it instead of facing it head-on. There’s this one night where I was extremely angry but instead of voicing my anger I decided to go to bed because I knew if I continued sitting around I would’ve just blown up.

Housemates can be quite annoying; who in the house would you have loved to give a piece of your mind to?

Definitely Tao! I was very close to biting his head off this past week. The thing is, Tao knows people’s boiling points and he plays on that to tick you off.  I avoided him for three days because I knew if I didn’t I was probably going to be disqualified instead of going through the normal eviction process. I’m only regretting now that I didn’t tell him where to get off.  He played a very dirty game which really pissed me off.

We then directed our questions to Mr 265 who shared the same sentiments about Tao.

Yes, Tao is definitely a bully to certain people especially with the fall out I had with him this week. He’s a very self-conceited individual who thinks that his achievements are a way of intimidating people. But I wasn’t shaken at all.

This fall out you’ve just mentioned, what was it all about?

Tao had told me before that he thought I was a mentalist, so for some strange reason he’d always think that I was trying to hypnotize him in some way. Also, Tao is not used to being told what to do so during a certain task that required concentration and silence, I had told him to tone it down because he was making a noise. He rebelled and became even more noisey which lead to my frustration and us butting heads.

This year Big Brother placed in quite a lot of alpha males in one house. Do you think he did that on purpose?

Definitely, personally for me the other main reason why I entered the house was to learn how to swallow my pride and ego. But yes, Big Brother was like a village filled with too many chief and when you have a situation like that, conflict is bound to occur every other day. 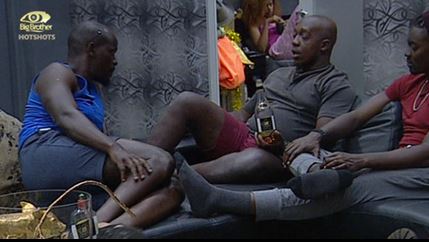