Another rumble in the jungle has occurred between rapper Kanye West and the media.  We must admit Kanye hasn’t had the best of day’s lately especially considering his public spat during a radio interview with MTV News anchor Sway Calloway.

It’s no secret that Kim Kardiashian’s fiancé’ detests the media and the recent fictional interview that has done its rounds on the internet has fueled his hatred towards all forms of media.  We honestly wouldn’t be surprised if the man decides to never do interviews again in his career.

A fictional interview with a certain website made its rounds last week when Kanye was falsely quoted to have considered himself a much greater influence to the world than Nelson Mandela ever was:

“Nelson Mandela did a lot of good work, don’t get me wrong.  But I think I'm on track to do something even bigger.  I liberate minds with my music.  That’s more important than liberating a few people from apartheid or whatever.”  The website reported.

Angered responses flocked into Kanye Wests twitter mentions as the public expressed their disapproval of his statement.  West remained quiet about the interview until last night where he addressed the fictional interview on his Twitter account.

“Respect to Mandela, his family and his legacy” the first tweet said.

He then continued with his second tweet clearing the rumors that claimed that he had said he was better than Nelson Mandela.

“Despite recent media reports, I’ve never said anything to dishonor or trivialize life or transition of one of the most inspiring leaders.”

West then tweeted about how his mother taught him the crucial role Madiba had played in history and how he respected Mandela’s work for the betterment of mankind.

More of his tweets below. 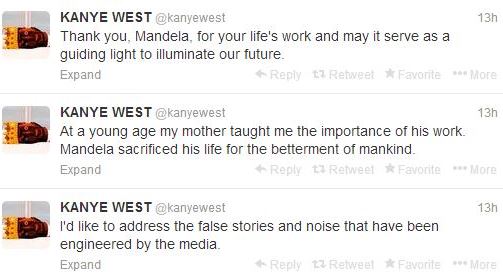