Maps Maponyane has found himself in hot water... again.

The TV presenter and model, who was attcked after making comments about Xhosa people, was dragged for another reason this time.

He took Twitter to share a picture of a man wearing a Caitlyn Jenner costume for halloween and he found the whole thing funny, adding that it was the best halloween costume of the year. 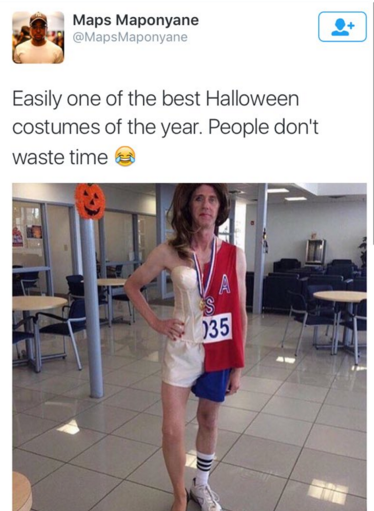 He got a lot of criticism for his tweet, which he later deleted. However, it was too late. People felt that he was being insenstive and they called him out.

RT @SosoRalgana @MapsMaponyane - Deleting tweets won't help. It was very insensitive of you to laugh at that. SMH

@MapsMaponyane So being a transsexual is something to joke & giggle about ?? All beauty and no brain

NOT FUNNY !!!RT @MapsMaponyane Easily one of the best Halloween costumes of the year. People don't waste time 😂 https://t.co/fSfNde2CSl

@MapsMaponyane delete this tweet, think about what we're telling you and apologise to trans people for supporting this. It's not cool.

@MapsMaponyane you deleted that tweet? Sure. You're gonna give us another fake apology and keep it moving, you harmed other kids ke bhuti

@MapsMaponyane when you support this kind of humour that hate is what you're propagating. Its very irresponsible as a public figure.

@MapsMaponyane transgender women are raped, assaulted and murdered because people think their existence is dishonesty/pretence.

There has been a lot of outcry about the Caitlyn Jenner costume. People are not finding in funny at all.

If you wear a Caitlyn Jenner costume for Halloween, you are hereby forfeiting your right to not have me vomit on you.