Pearl Thusi is not feeling Trevor Noah and she's not hiding it.

A few months ago, The TV and radio presenter took to Instagram to reveal that she doesn't like the comedian. Although she doesn't "really like him", she mentioned that she's proud of him.

Pearl received a lot of backlash for the post, with some people accusing her of being a hater. 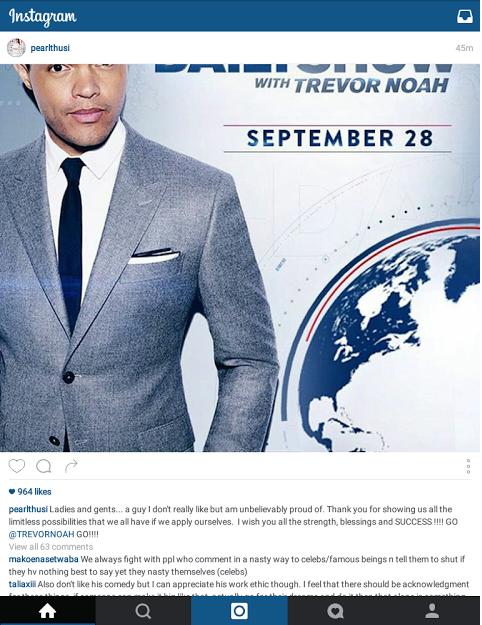 Speaking to Gareth Cliff on CliffCentral on Monday morning, Pearl explained why The Daily Show host is not her favourite person: "It's so petty."

She continued: "He's dated a girl I know and I didn't like what she had to say. Uhm, he's very like 'we're at a table, I'm gonna take over' you know, 'I'm most famous type thing'. There's that thing, you know, it's unsaid but it's there. Maybe I'm just being insecure, maybe it's that.

"But he's very like, 'I'm Trevor Noah, I'm smart, I'm clever, I'm whatever' and you'll be there with people who are his friends and he's like 'I'm not interested in you'," Pearl told Gareth.

Read: The real reason behind Bonang and Thusi's beef

She also spoke about an incident that happened in Cape Town. "There was this one time, now he knows all the people that I was with and they will stand with me on this. We were in Cape Town at this hotel... And he came with I think it was a Ferrari or a Lamborghini... and he comes up and they were like 'look, it's Trevor' and I'm like 'ugh, he's not the nicest guy... He did not even greet us and I was like 'this is it, I'm done with this guy'."