The week will start off in the most difficult way for rapper and SA Idols host Proverb, who has confirmed that his wife of 10 years has indeed been cheating on him with a Joburg businessman by the name of Edwin Sodi.

Proverb, real name Tebogo Thekisho, took to Twitter to confirm the cheating rumours. Proverb begged for Twitterville to spare his wife, Onalerona Thekisho, judgment. Proverb’s main focus now is protecting his kids and both families from the entire ordeal. He later deleted his tweets. 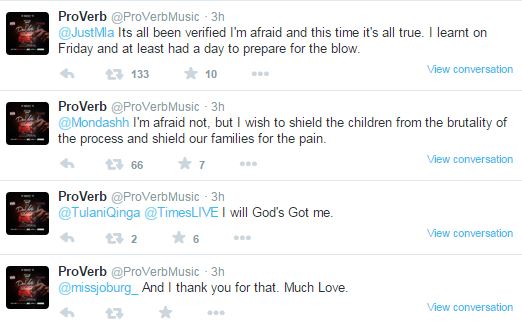 The rapper received great support from his followers.

Whilst some… well... you guys know how Twitter can get.

Proverb cheated on her in 2009 they then separated got back together and he did it again in 2011, now when a woman does it,it's a shock? 😕

Proverb got cheated on, so what? People get cheated on every day. He probably cheated on her first. Women don't just cheat