Our correspondent Lesedi Montjane was at the red carpet premiere of Bustin Chops last night. She gives us the full scoop on what to expect from this film, and whether or not it's worth the watch.

If you’re looking for a Boere version of Jackass with a narrative twist, then Bustin Chops is a must watch. The newest local film to hit the circuit sees main character, Eugene, telling a movie mogul he has recently met in a bar about his attempt to be famous.

A group of reformed stunt men decide they are fed up with their short stint in the 9-to-5 life, and decide to give the dream of being famous another try. They get creative and make four short films: A horro film, a comedy, an action film, and a romance film. 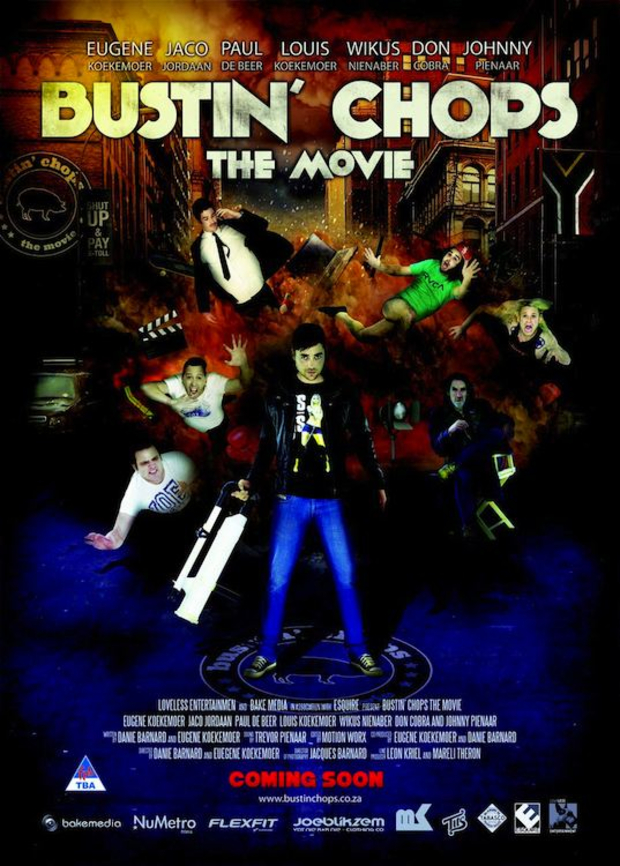 The group want to impress with their acting skills along with original stunts, and so each genre is approached differently and often blended with two different and completely South African concepts.

The romance film was a rudgy musical with a male ‘female’ character that is not afraid of showing ‘her’ nether region. The action short film used unfamiliar voices to replace those of the characters while managing to throw in some Setswana slang phrases. It’s manically hilarious and one really has to see it to grasp the humour.

Eugene continues to amaze the movie mogul with his tales of python bites and bull sperm, as the movie always returns to the initial scene of the two in a bar.

Bustin’ Chops Sure to be Another SA Classic

As a film, Bustin’ Chops is vintage South African in that it includes civilians in stunts aimed at scaring people as well as portraying real life situations like the march against E-tolls. It is a Boere movie, with a some speech Afrikaans (Which is obviously subtitled). The visuals soften the task of having to read (for the non-Afrikaans speakers) rather than watch the movie by providing funny, insane and occasionally disgusting stunts.

I don’t want to give too much away, but if you’re looking for relatable and completely South African humour, as well as an opportunity to laugh at a ‘Boere man se pyn’ and learn what Not to do when in possession of fireworks, then Bustin’ Chops is the film for you.

Bustin' Chops is hitting a cinema near you on the 12th of July. Watch the trailer today and book your ticket to not miss out on the newest local hit on circuit!