Our Perfect Wedding needs to win an Emmy, a YOU Spectacular Award and a Royal Soapie Award for the amount of jaw dropping and cringing moments the show exposes us to on a weekly basis.  This past week, our poor hearts just couldn’t take the amount of pretentious comedy that was given to us by this week's “straight couple”.  Why is it always the Limpopo episodes that have us rolling on the floor guys?

Last night Thabiso and his wife invited the rest of Mzansi to witness their perfect wedding and let’s just say the wedding was nothing short of perfection, thanks to Thabiso’s extremely competent feminine ways.  The “gentle man” was hands on with everything.   If given the opportunity, we’re sure he would’ve loved to style his lady’s hair and even place his own desired make-up foundation not only on his wife but on himself too! Heck maybe he did when the cameras were not rolling!

Also, did anybody notice how many times the bride appeared on screen in comparison to her flamboyant groom who even insisted on knowing what type of fabric was being used for their traditional attire.  A groom made in heaven right ladies?

Now we know how rough social media can be when this show comes on, but this week the social media brutality was as real as it gets as Thabiso was suspected of being gay. And look, it's not that there’s anything wrong with being gay it's just a bit awkward when the person you marry is not of the same sex (If you are indeed gay).  Last night Thabiso and Lebo received little mercy from South Africans and their cynical comments. Even the Masina twin's sent a couple of shots towards the couple, well towards Thabiso more than to Lebo.

Thabiso who's a man that's clearly not afraid to stand up for himself and his wife retaliated with this Facebook status.

We'll be honest we were also suspicious, especially when he made a comment about loving anything that starts with a "D" and after that we stalked his Facebook page and came across this glittery post.

The wedding was honestly not that bad, however  Thabiso and Lebo joined a long list of couples on Our Perfect Wedding who have failed dismally when the time to kiss their brides/grooms has come.  We found it very strange that Thabiso took off his blazer and flexed his skinny body before the moment of truth- was he psyching himself up before the kiss?  It honestly can't be that difficult to kiss your new wife, can it? 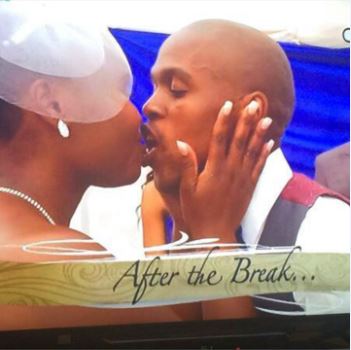