DJ Maphorisa is proving that he's a big deal.

The Uhuru band member is putting South Africa on the map, one song at a time.

While the world is excited about Drake dropping two tracks - one titled Pop Style, featuring Kanye West and Jay Z, and another one called One Dance, which features Wizkid and Kyla - Mzansi is celebrating the fact that Maphorisa got a mention in one of the songs.

The South African DJ co-produced One Dance and the nation couldn't be prouder. 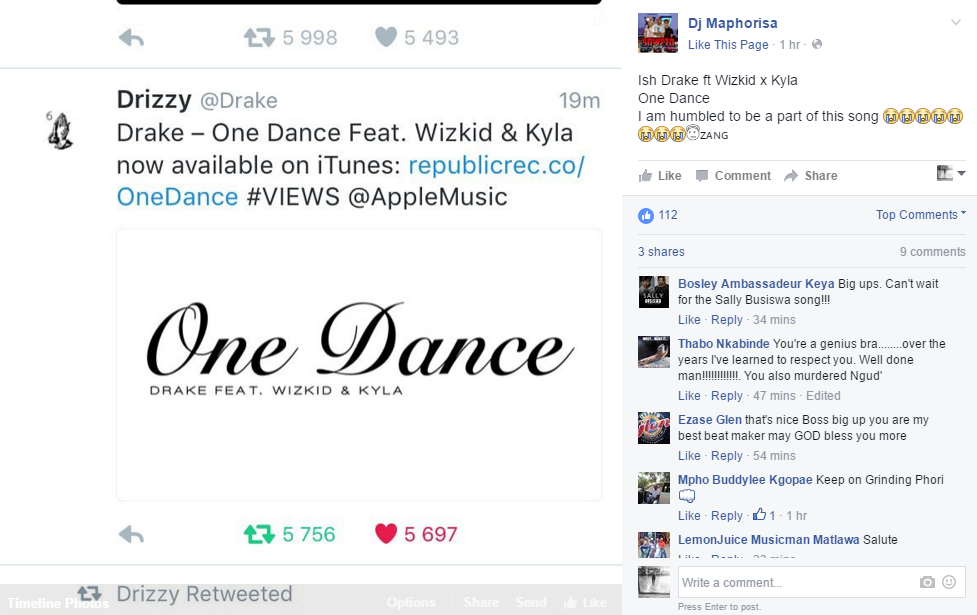 The DJ has received a lot of congratulatory messages from proud fans and other SA musicians.

Well done, Maphorisa. Mzansi is very proud of you.

Meanwhile, some people are having a difficult time giving props to Wizkid for being featured in the song, because they cannot hear his part.

Wizkid's part sounded like it was sent via what's app.

How can they use wizkid to do background mumbling... One of our biggest artist oh!! They didn't even give the mumbling volume

Wizkid speaking to himself right now ..

Am I truly in that song ?

I am in that song, Drake wrote my name pic.twitter.com/NEN5bxyUhI

😂 come on! He was the background voice RT @Femi_17: Nawa. Looking for Wizkid's Voice on a track like it's searching for a needle in a hayst

Whether you hear him or not, he's still in the song. JJ Omojuwa, a Nigerian blogger, summed it up nicely:

I see subs directed at WizKid's cameo appearance in the Drake song. It just shows how no matter how far you go, there is no pleasing humans.

Note that this wasn't WizKid featuring Drake, this is the reverse. Drake had an idea and he called WizKid to execute it. Wiz should be proud