Actress and TV personality Nomzamo Mbatha has revealed that she will forever be an Orlando Pirates fan, whether they’re on top of their game or not.

In an interview with Pirates TV, Nomzamo explained how she’s been a Buccaneer since she was a little girl and that didn’t settle well with her late father.

“I’ve always been a Buccaneer since I was very, very small. Since I can remember anything about the sport. My father was not happy about that because he supported the other team which I will not mention, and my mom is a Buccaneers fan. So he could never get the fact that his daughter was not supporting the same team as he was.”

Nomzamo also mentioned that she’s well aware that other supporters have their own issues and own opinions of what a Buccaneers fan should look like, but she’ll forever remain a Buccaneer for life.

She then explained how other teams' fans perceive how Orlando Pirates fans look like: “Have you never seen the memes where they tease us!? They’ll just take like an old drunken woman from the township and they’ll put our badge and then they’ll take a cheese girl from the suburbs and put the other team’s badge which I won’t mention, and I’ll always have an issue with that.” 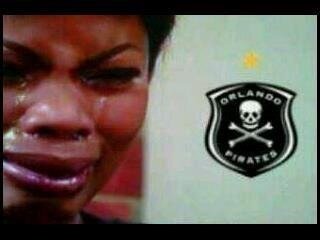 However, besides the ridicule her team has been receiving, Nomzamo still believes that the Buccaneers have impeccable skills on the field.

“I know that our boys just have talent and that’s what we’re about, you will see the skill on the field and that’s what speaks for us. We don’t come there with gelled hair and fancy hairstyles, we are about the sport,” she proudly said.

We walk away knowing we put up a good fight ! 💀💀💀 #Stadium #PiratesVSchiefs my aunt and I jumping for joy P.S I'm VERY competitive 😪

Orlando Pirates midfielder Thabo Rakhele will also be glad to know that he is Nomzamo's favourite player in the team. Nomzamo praised the player's talents and mentioned how entertaining it is to watch him play.