If you do not remember her face, you will surely remember that beauitful, silky-Afro of hers. that had us gawking at our television screens everytime an episode of Precious Africa came on. Since the season finale of Precious Africa, Precious has been living a quiet life abroad in America with her husband and three year old son .Yes, for those who were unaware Precious is happily married, lives in America and is absolutely enjoying the joys of mother hood.

ZAlebs caught up with the former television presenter in an early morning international interview which ended being quite an insightful conversation about the life of Precious aka Mrs Schamel. 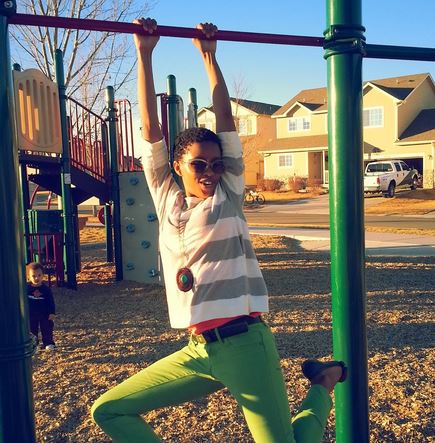 Hi Precious, welcome to ZAlebs before we kick off the interview there’s one thing we’d like to know.  Have you finally found your reading glasses. On your blog you sounded quite distressed about losing them?

[Laughs] Thank you for your concern and that is a very important question because I can’t even read from my laptop unless I’m like thirty centimetres away from the screen.   Unfortunately I have not found them and I’m not really motivated to find them.  Maybe I should just surrender and actually wear contact lenses like everyone has been advising me to.  I’m obviously fighting a losing battle here. [Laughs]

ZAlebs is an avid reader of your blog and we can’t help but realise that your style of writing constantly exudes some kind of tranquillity. Where does this calm energy come from?

That’s so good to hear because the blog is only but a moment in my life in general.  But I’ve made a conscious decision to record the important events that happen in my life no matter how trivial they may seem.  So having the blog allows me to zone in and just highlight things and events that bring in positive energy to my life. I’ve been taking writing classes lately and I saw an excerpt that read:

“Writing is first and foremost for yourself”

And that couldn’t be more true because I’ve never considered myself to be much of a writer, but as I write each post, I’m writing it for myself.  It allows me to magnify the happy moments in my life and I guess why you as a reader are able to feel the positive energy and tranquillity coming from those words.

I guess it’s because they’re the only two countries I’ve ever lived in.  It’s only natural that I make those comparisons because I’m also still fairly new in America and I’m still trying to find my feet here with my South African background.  I also think that being in a space where you’re viewed as an “alien” even on your green card, can make you feel a bit alienated and when you feel like that, nothing is familiar to you but your background.

Almost every month there’s an American artist coming to perform in South Africa. What’s your take on Western influence on South African youth seeing that you’re at the heart of the Western culture?

Since becoming a resident in the United States I’ve realised that Americans are quite good at their P.R around the world in such a way that you feel like you know America quite well. They’ve mastered the ability to influence other cultures and I feel that South African youths should just be careful as to how much they consume of the culture.  It's always important to look in retrospect as to how another culture will better you as an individual.

What did you learn about yourself during your journey through Africa whilst you were still filming Precious Africa?

There was a time during Precious Africa where I was searching for a lot of questions in the documentary.  And the reason for creating the documentary was because I was confused, about who I was, where I was from, why I was from there and where I’m going. I just had many questions which needed answers, more than anything I realised during that journey that I needed direction, so in that, search funny enough, I did not find the answers to my questions by travelling to those countries even though it was an incredible experience I found the answers while I was on my own praying.  So I guess Precious Africa more than anything pushed me to keep on searching even when there were no signs of finding the answers.

Stay tuned for our Part 2 interview with Precious.  P.S. we've just found out she found her glasses.