The issue has died down by now, but I came across the series of tweets that sparked some genuine fury on Twitter yesterday. It all began when popular tweeter, @AwkwardlyH shared a joke from her account. It all became a bit more interesting when Highveld Stereo's official Twitter account shared the exact same joke, albeit with a few tweaks, several minutes later. Here's what it looked like:

.@947Highveld & their DJ's cant claim the show's topic as theirs. Look at theirs & @AwkwardlyH's tweets + timestamps pic.twitter.com/teOKKVqwL6

The station then ran with the "first born" topic on air, during Anele's drivetime show. The end result? @AwkwardlyH changed her Twitter Bio. 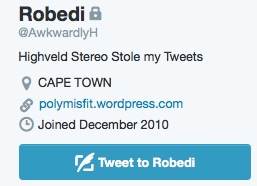 I've read a lot on the topic of joke theft online and I've seen it happen to friends without so much as an apology or any other kind of acknowledgment from whatever big brand has decided to use their material. Many of @AwkwardlyH's followers, as well as other Twitter users whose attention to the issue was raised by her followers have accused Highveld and Anele of plagiarism. Here was Anele's response:

I spoke to the editor of Now.co.za Deshnee Subramany (Who gave her own excellent take on the Highveld tweet stealing issue). My initial query was "does this count as plagiarism?" and I think she was bang on when she responded by telling me "Yes, but on top of that, Anele and Highveld could have responded by apologising for the idea created first and then explaining the situation. The victim in this situation would probably be more open to listening once they felt their feelings were acknowledged."

Isn't that what Highveld did?

Anele's defence showed no consideration to @AwkwardlyH's grievance. Something that could have been resolved with a simple edit (Or an even simpler "via @AwkwardlyH" in the initial tweet) could have developed into a PR headache for Highveld if more people gave a crap about plagiarism.

The unfortunate reality is that most people treat ideas and information on the internet with less respect than traditional media. It wouldn't be okay to steal your school mate's answer and use it in your own class, you'd be punished.

"It's just a tweet" is the common mindset these days. A tweet – a moment of inspiration manifesting itself into a piece of 140-character-lengthed-humour – is yours. Intellectually and legally (Yes, legally. Twitter has emphasized numerous times that users are the owners of their tweets, they even went to court on the matter in 2012.  It is maintained in their terms of service that a tweet is the property of the account from which it originates).

But Twitter, despite its well meaning terms and conditions, cannot enforce its laws (Especially when unreported). And so we'll end up with situations where Highveld Stereo can take a cool joke from someone on Twitter and use it as their own. Their 145,000 followers were amused, their hundreds of thousands of listeners joined in the discussion, and @AwkwardlyH was left twiddling her thumbs, watching a big brand receive praise for her wit.

I'm a writer. I don't care if I'm good or not, I deserve recognition for my words before someone else uses them on their platform. Just like any photographer deserves to attributed before their work is grabbed from Google Images and used on a blog. Just like a social media figure deserves a simple mention before a big name radio station uses their joke as their own material to entertain the masses.

Anele's response basically suggested that "We do this all the time, so it's okay"

The sad thing is that she's right. It does happen all the time, and it is okay because "It's just a tweet"