So by now you've heard about the scandal of the year. A team of hackers successfully stole nude photographs of multiple celebrities (There's a full list of who was implicated here)  and leaked them onto the internet. They are all legit, none are fake and a lot of celebrities are in some very sticky situations right now. We have to say, we at Team ZAlebs feel for those affected. But it also leads us to a whole different question altogether; if Jennifer Lawrence's iPhone isn't safe, what makes me think I'm safe? Let's break this all down.

Should I be taking sexy pictures?

Well, it's not as if you're not allowed to! It's your right to take cute, sexy or even naughty pictures for your private use. But at the same time you need to be very aware of the fact that should those images get into the wrong hands, your reputation could be heading for some serious damage. Obviously if you never take any dodgy pictures, you have nothing to worry about. But if you do, you need to be sensible about where you are storing them and with whom you are sharing them (And if you're publishing them, why).

For instance, I know a girl who used to post some risque pictures on the daily. One day she posted a pic of herself topless and deleted it. These Hollywood celebrities deleted some of these iCloud pictures, but they were still found by the hackers. Once it's on a platform you can't control (iCloud, Facebook, Twitter, Insta...) You don't really know for sure just how permanent a delete is and it could come back to bite you in a few month's time. Bottom line, know exactly what you're getting yourself into when you're managing your pictures.

Is my iCloud account safe? (And what happened to those American celebrities) 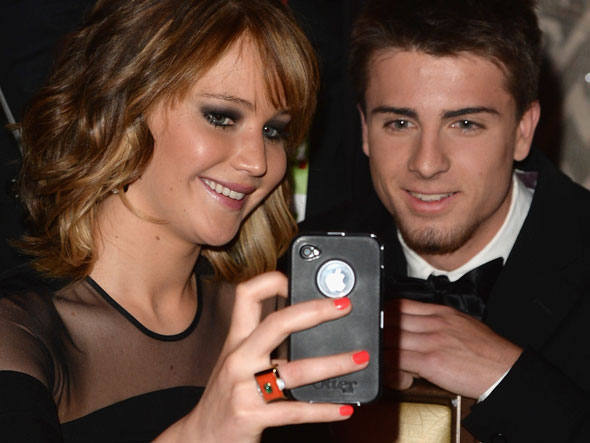 So here's how it allegedly happened to Jennifer Lawrence, Ariana Grande, Rihanna and more than 100 other American Celebs. Hackers gained access to Apple's photosharing/storage service, iCloud (If you have an iPhone, iPad, Macbook, you'll know this very well) and for some, there is an option to automatically upload or backup images to your iCloud. So let's pretend you're Jennifer Lawrence and you've taken a picture of your puppy, it will automatically save to your phone and upload to your iCloud account (Imagine, some people have this setting on and don't even know). If someone can access Apple's server, they can access your images. Clean or dirty.

Our very own sexy Angel, Candice Swanepoel was one of the many female celebs named in the drama involving leaked nude pictures, but she didn’t let it get her down.

According to MailOnline, the Victoria’s Secret model brushed the rumours off by partying at the Burning Man Festival.

It hasn't been 100% confirmed that iCloud was indeed hacked, but that's the theory doing the rounds. If you're a worried iPhone/iCloud user, you can off photo syncing through Settings > iCloud on your iPhone or iPad, or, for additional security, set up two-step verification by following these instructions.

Am I allowed to look at the leaked nude images?

Considering that anybody who has been sharing these images has had their accounts suspended, been taken to jail, been fined, had their site/blog de-listed or faced general overwhelming backlash, we're going to go ahead and say no.

Besides, these are stolen images. These celebrities are being humiliated and having their privacy crapped on- why do you want to be a part of that?

Can I use my ex's nudes for revenge? (They weren't stolen!)

Here's a few stories of some people who have decided to humiliate their exes in the worst way. Courtesy of our sister station, Jacaranda FM

We recieved an sms late yesterday where a listener told us that he has 'nude selfies' that his ex sent him when they were together, but because she left him in a bitter split, he now plans to use them against her.
We asked you for your stories, and it seems this is more common than you may think.
Listen to the full discussion below and drop us a comment - Do you think this is ok? We'd love to hear from you.

So that's it from us, just make sure you're careful with your private pictures and you know beyond doubt you can trust any platform or person with them.