It’s almost a week since Big Brother Hotshot landed on our television screens and already the drama has unfolded between three housemates who are involved in a love triangle.

Housemate Luis who has been involved in a somewhat lukewarm relationship with Lillian has shifted his interest towards another lady housemate, Mira. Throughout the week Luis and Mira have become quite close even to such an extent that they shared a bed with each other and cuddled up like a couple who has been dating for a while. We can’t help but wonder if the cuddling did not lead to other activities only suitable for the private eye.

Mira has also been enjoying this new relationship she’s developed with Luis, yesterday she took the lead by sitting next to Luis and placing her leg on top of him. Luis obviously grasped the opportunity and began whispering sweet-nothings to Mira whilst wrapping his arms around her, Mira of course did not fight back the clasp of Luis’ arms. 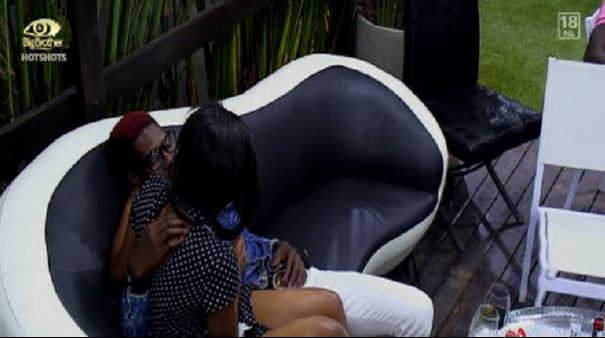 It’s still early days, but it seems like these two housemates might be seriously into each other despite Luis’ on and off relationship with Lillian.

Usually when a relationship is formed in the Big Brother House the most feared threat to the union is the possibility of eviction. Luis was confident that they both weren’t going anywhere.

“We are going to make this work, no matter what.” Said Luis. Mira responded by caressing him and moving closer to the Namibian born housemate.