Y’all remember how reality star Lexi van Niekerk made headlines when she was on Big Brother Mzansi in 2014? Well, this time Lexi has managed to annoy some of Big Brother Mzansi’s current supporters over some toes. Yes, toes.

Lexi, who was a former contestant of the television show, posted a picture of K2’s toes on Instagram, and wrote this next to it: “K2 is now KToe... only on #BBM 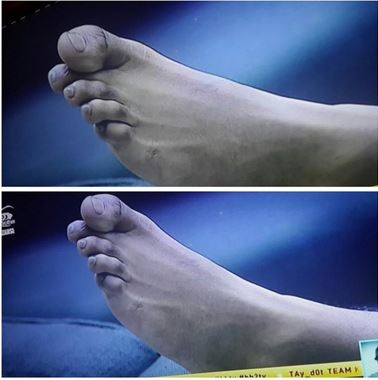 In just less than an hour after the picture was posted, fans of the BBM couple (K2 and his girlfriend Blue) took to social media in a frenzy, slamming Lexi’s joke as not funny at all. Name calling and insults were hurled from the fans. Here are some of the tweets from the unimpressed followers:

Lexi is qaba nje,always has been and always be a qaba...who cares what she says or does,she must just take a back seat #BBMzansi

Despite #TeamK2Blue’s efforts to scold Lexi from posting such pictures in the future, the reality star just ended up retaliating and took jabs at the fans who call the couple ‘royal K2Blue’. How did she do it? Well, she posted a video of the toes with the caption: “These toes ain't Royal. K2's toes on #BBM Oh and this post made all the ugly people hate me... K2 doesn't know any of you... So what's your insults supposed to do to me? Grow up or buy a sense of humour, you stupid swines!!”

She then took to Twitter to make her point further known: 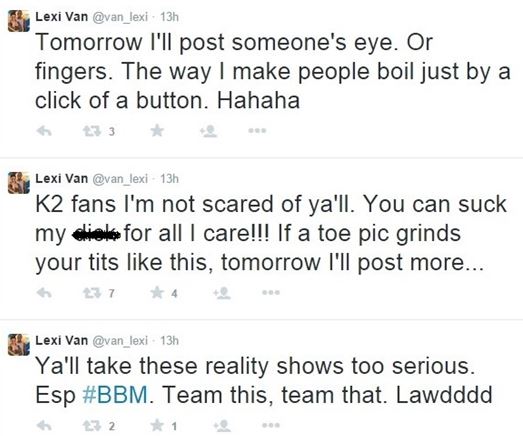