Seems like intombi yom’zulu has landed herself a mini-role (see what I did there?) on SABC 2’s 7de Laan. Moments ago Minnie Dlamini took a selfie getting dolled up by her glam squad for a scene on the show. Now, it’s not clear if she’s acting as herself or as a new character but it should be interesting to see Minnie act out a role in Afrikaans (has anyone ever heard her speak the language?) 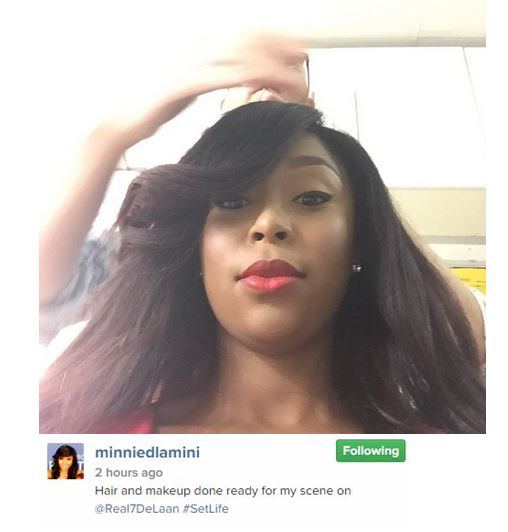 Speaking of being glammed up, Minnie was also spotted on the red carpet at the SAFTAs last night looking oh so glamorous not to mention gorgeous in a Gert-Johan Coetzee gown whilst Bonang was dressed by another designer.  For years,  there have been rumours that the two TV personalities do not see eye-to-eye, which lead us to wonder if  Bonang and Gert are still on good terms? Considering how professional Queen B* tends to be that might not be the case, but it's interesting all the same!

This will not be Minnie's first appearance on a soapie as she also had a role on Generations a few years back. Well we can't wait to see Minnie polish up her acting skills on the soapie.

Also See: have a look at some of the awkward moments that occured at the SAFTAs