Bringing you an electric atmosphere with insane beats, you’re guaranteed to feel the music taking over New Church Street in Cape Town for the mother of all street parties on New Years Eve. Put on your dancing shoes and gear up for the most explosive party at the Protea Hotel Fire & Ice in Cape Town. With the crème de la crème in attendance, expect to see a combination of all the “Who’s Whos" in South Africa’s social scene as well as top local DJs including the likes of, ; Lulo Café, DJ Naves and DJ Sphectacula from Metro FM, DJ Fistaz Mixwell, DJ Ozzy, Ashton Ables, with DJ Justeez, Kaunda and many more.

This year the hotel celebrates its 5th birthday with heaps of excitement on the street. They'll be bringing you not only the biggest New Year’s Eve countdown projection, but also a VIP indoor champagne lounge as well confetti cannons that are set to be lined up on the streets for all to usher in the New Year in glitz and glam.

To add to the night's exciting festivities, the hotel has decided to launch a competition that will have you and three friends experience a once in a life time 5 day trip to Reunion island! 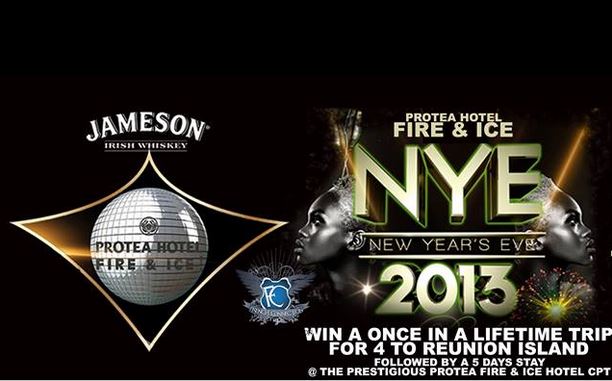 Courtesy of Jameson’s Irish whiskey, you and your friends will experience a VIP styled journey to the best parties in both magical party locations.  You’re probably already worried about the expenses you’ll have to fork out for this once in a life time party but fear not because Jameson Irish whisky has that covered by providing you with an all-expenses paid for budget; meaning you won't pay a cent

Event details are as follows: