While the Scottish Independence debate caused a European frenzy, across the pond Beyoncé was causing controversy of her own.

The Beyoncé thigh gap debate has got fans (and haters) on social media talking about whether it is real or photoshopped.

Queen Bey posted pictures of a recent beach holiday on her tumblr account this week.

The post featured a number of bikini shots that showed her having a thigh gap - which Internet trolls are convinced is fake.

In case you were wondering, it's pretty self-explanatory but a thigh gap (usually seen on super skinny models) is the space between a woman's upper thighs that is visible when her knees touch.

But many take it a step further and insist a true thigh gap basically means your thighs shouldn't rub together when you walk.

That's the best I can do to explain it, because the whole thing is quite laughable.

Below is one of the offending pics from Bey's tumblr (note the distorted stair, which is what has got everyone crying foul) 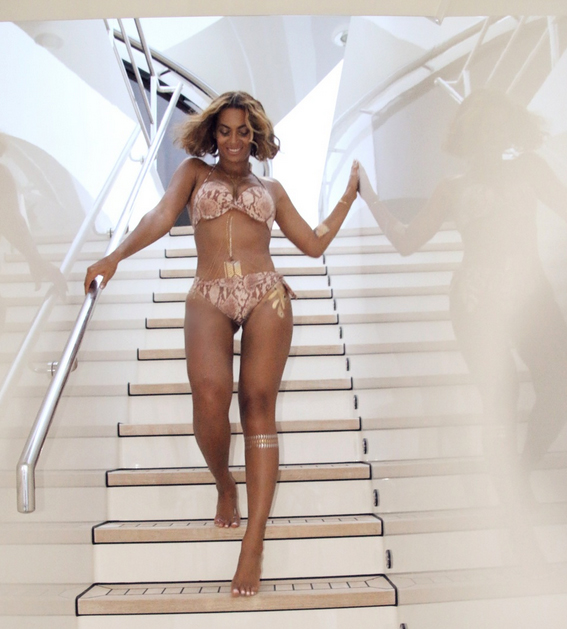 Beyoncé's recent holiday snaps are not the first time she has come under fire for allegedly using photoshop to create a thigh gap. An Instragram picture she uploaded in April caused an outcry too.

The picture showed Beyoncé playing golf in a bikini, with noticeably thinner thighs. Check out the picture below.

Beyoncé is not the only celebrity who appears to be photoshopping her pictures. Real Housewives' star, Kim Zolciak, showed off the results of her boob job and tummy tuck. The mother of six posted a front and back shot of her in a red bikini. However, despite her plastic surgery admissions, it seems not even she can fake a thigh gap. In one of the pictures, her behind seems to be higher than normal and the black ribbon on her bikini looks like it was cut off - evidence of photoshop.

Why in 2014, when fuller figures are supposedly the new ideal, does any woman want a thigh gap so bad they have to photoshop one in their "candid" pictures? (Yes, we looking at you Beyoncé).

Bey probably has a team of people who edit all her Instagram pictures.  This isn't as farfetched as it may sound. After the Kimye wedding in May, Kanye admitted that they had to edit one of their photos for four days before posting it. It is now the most liked Instagram picture with more than 2-million likes.

As mind boggling as it may seem, having a thigh gap is an obsession for many women as it basically means they're not fat (in their minds). 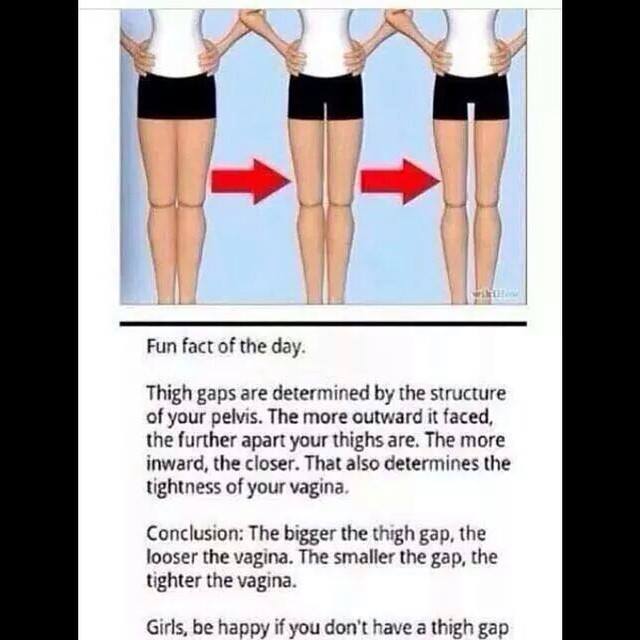 "Plus size" model, Robyn Lawley, has slammed the thigh gap trend, which she describes as disturbing and harmful.  She wrote a column for The Daily Beast last year about why the trend makes her so mad.

She wrote: "There is now a disturbing breed of thinspiration that pressures women and girls to pursue a “thigh gap". The truth is I couldn’t care less about needing a supposed “thigh gap.” It’s just another tool of manipulation that other people are trying to use to keep me from loving my body. Why would I want to starve and weaken my natural body size? I’m not saying women who have it naturally are unattractive. But I would have to change my entire frame just to achieve something that seems so trivial."

Many people are angry with Beyoncé because she is setting a bad example for women who look up to her. If Beyoncé, with her personal trainers, can't achieve a natural thigh gap without using photoshop then why is she creating a false ideal?

It's bad enough when magazines photoshop celebrities to such an extent that they are not recognisable, but when celebrities start doing this on supposedly candid pictures then society has a big problem.

We don't think there is anything wrong with women having a thigh gap, but if you have to photoshop your pictures then you have a serious problem.

We love you Queen Bey, but just say no to the fake thigh gap.

In the words of Meghan Trainor:  "I know you think you're fat, but I'm here to tell ya, every inch of you is perfect from the bottom to the top...It's all about that bass".  *sips tea*

What do you think about the thigh gap trend?