The radio and TV presenter has fans from across the world, including Boris Kodjoe. Yes, the sexy bombshell who has made an impact in recent years with his role on the hilarious Real Husbands of Hollywood loves Mzansi's queen of entertainment. The actor, who is currently in SA, shared that he's a fan of Queen B's Front Row show on Metro FM.

Boris tweeted: I'm turnt up on the set listening to @METROFMSA. They do it right here in Cape Town. #jamming #nakedDJ? #whyIsHenakedThough? #Doesntmatter." 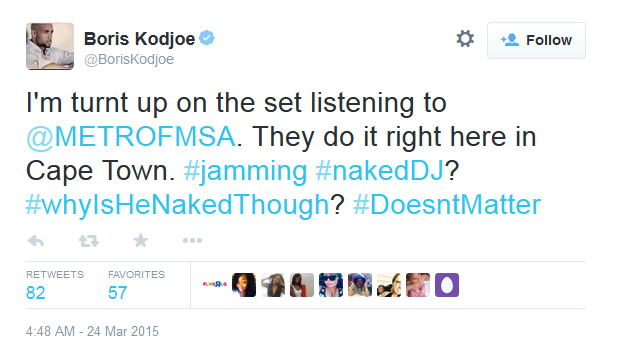 Bonang took to Twitter to thank the actor and welcomed him to South Africa. Boris' response was: "You guys are great. Much love." OMG! How awesome is that? Man, B and her team are clearly doing something right.

It's also nice to see that he's enjoying his stay in Mzansi. He's visited a couple of places and so far he seems really impressed. I remember we wrote a few weeks ago that it's time to hide your girlfriend because Boris is one hell of a good looking man!

How awesome would it be if he went back to the USA and started advising people to tune in to Metro FM every day?