You're always told to be wary of what you post on your social networks; especially in an age where everyone knows how to save a screen shot as evidence (So there's no pretending to delete posts and hiding from your actions!)

FHM Writers Max Barashenkov and Montle Moorosi have found this out in the hardest (And most deserved) way possible; through suspension from work. Here's what sparked the controversy 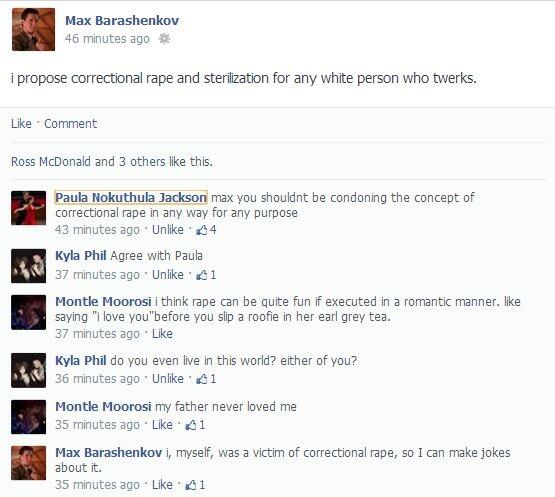 The "Joke" was not shared by many as readers and fans of the magazine were shocked and appalled that the writers would share something so tasteless on a public platform.

FHM acted promptly by announcing that the matter would be dealt with immediately and internally.

It's great to see the company making an immediate stand and a response, choosing to disassociate their brands with such disgusting behavior. One would hope that the two never work for any publication in the country again, especially if this is how they exert their influence on the public.

As a complete Aside, Zalebs supports and defends anybody and everybody's right to twerk. Regardless of age, creed or gender.