On Tuesday afternoon Kuli Roberts gave us a bit of a lecture in light of the World Cup season that is ahead of us. Considering the amount of drug mule cases that involve South Africans, Kuli saw it fit to remind us that being a drug mule is a definite no no!

The first tweet had us a bit puzzled as we tried to figure out what Miss Roberts was on about, but then a series of  tweets from the Kaya FM radio personality made it clear to us that she's only trying to look out for us.

Here's a few reasons why she thinks you should avoid being a drug mule:

Yes it's true! Ever felt like you're missing out on a whole lot of things in the Twitter world whenever you've run out of data or B.I.S? Now imagine how that will feel while you are incarcerated; you won't even remember the smell of a cellphone!

Ooh, ok this second reason had us giggling a bit, it's a valid reason too.

Music, partying, good food a clean bathroom.  Yep! you're going to miss everything! 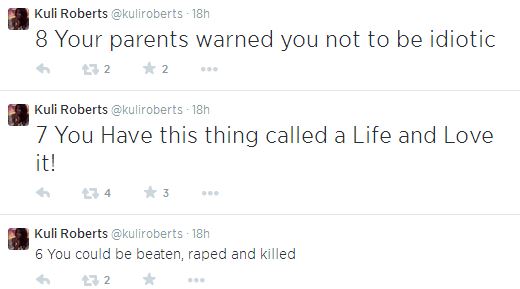 The last three reasons were more than enough for us to say no to drugs and stick to being  good law-abiding citizens.  So before you decide to dabble with the wrong side of the law just remember these eight reasons given by aunt Kuli, thank her later and enjoy the World Cup.