Zahara’s third album, Country Girl, is already gaining a huge amount of success, considering that the album was only released on Friday, 25 September.

Zahara, who has been taking her fans on this album journey, has expressed great gratitude towards the love she’s been receiving from the public.

However, in August, Zahara had a bone to pick with those people who claim to love her music but only buy pirated copies of her albums.

Zahara took to Facebook a month ago and wrote a long letter about how she feels about piracy and people who support it, and we're sure it was a hard pill to swallow for some of her "supporters". 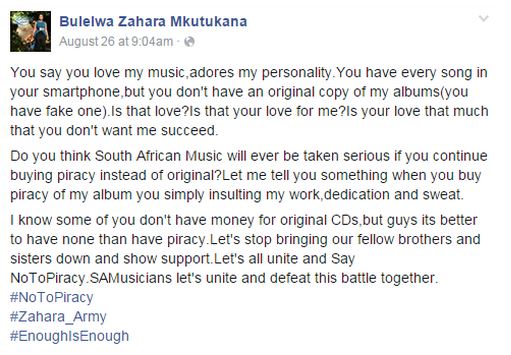 The good news is that it seems like her fans heard her cries and on Friday, her fans went out to support the singer.

Thank you so much.

This is what we call a true fan

Thank you so much @khanya_sa

The album is even in demand abroad

Her career is not the only thing that's going right in Zahara's life. Her relationship with Umhlomo Wenene radio personality Amaza Ntshanga has become stronger and stronger by the day.

Zahara has a busy schedule this week, from launching her album to performing at the Blankets & Wine concert in Kampala, Uganda.