Siv Ngesi is speaking out about a racist encounter he had with a white couple recently.

The actor and comedian says the incident was so bad that he now plans to file charges against the couple.

Siv claims he was called a baboon and physically assaulted after trying to apologise for his Uber driver’s vehicle being parked in the couple’s way.

“After a [buddy’s] birthday party had finished, I ordered an Uber. When we came out, the Uber was next to a parking bay with hazards on. I was about to jump into the Uber when I saw a couple screaming and shouting at the Uber to move out the way because he was blocking their way out. I went to them to apologize and explain that it was my bad. Instead of calming down, they just kept on screaming and hooting, telling me to stuff off,” he said on Facebook.

Siv admits that he was angered by the situation, and when he approached the passenger side of the couple’s car, the woman hit him in the face.

After arguing back and forth with the couple, Siv went back to his Uber.

He claims that after warning them that they had “messed with the wrong guy”, the couple pulled up next to his Uber and hurled racial insults at him.

“…they were making baboon/monkey sounds and actions. With their window down, I heard them say ‘You're illiterate, you're stupid, by the time you find me you'll be my servant’. I managed to get their number plate details and in the morning I shared it online. In 10 minutes I knew their names and details.”

Siv says the incident left him angry and sad.

“I could have made many other choices which would not have ended favourably, but despite an argument, and some harsh words, I never climbed into the gutter to insult them for their colour, nor did I choose violence…I share this because it comes from my heart, and also because I am now a little bit closer to truly understanding what so many of my brothers and sisters still live with when white people go rogue,” he concluded.

The drama did not end there for Siv, as after sharing his story online he was apparently slammed by feminists for the way he handled the situation.

A women hit me with her ringed hand , I didnt hit her back and told her she's lucky I don't hit women .. Siv is now a sexist and misogynist 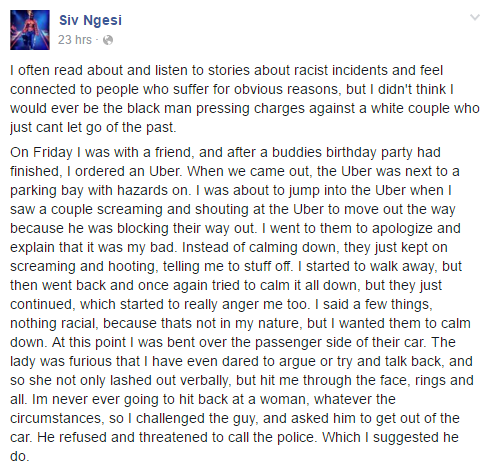 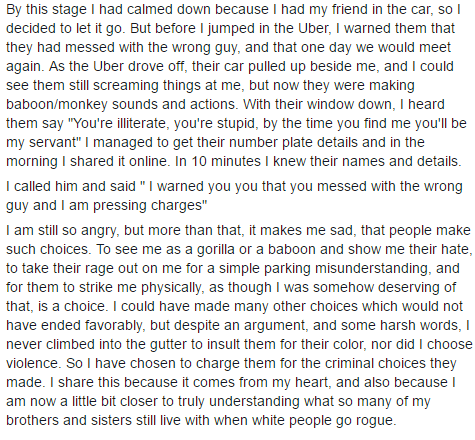