On Sunday it came to our attention that the amazing Bongo Maffin are experiencing difficulties when it comes to dealing with band leader,Thandiswa Mazwai.  According to sources Thandiswa had a fall out with dreadlocked member, Jah Seed after a heated argument occurred between the two on the wayback to Johannesburg from a gig in Kimberly.

Apparently the argument was so intense that Thandiswa stormed out of the car and hitchhiked the rest of the way back to Johannesburg.  Ok let’s back-track a bit herel Thandiswa? Hitchhike?

Not only is she one of the top selling female artists in our country but she has built quite a reputation in Europe and Africa too, we certainly can’t imagine here putting up the thumb and climbing into some strangers car.

According to certain newspapers both Thandiswa and Jah Seed are quite stubborn and have cold personalities. We’ve never had the pleasure of meeting Jah Seed but we’ve had a few encounters with Thandiswa Mazwai and well, the woman has to be the sweetest and most kind-hearted woman we’ve ever come across in this fickle industry.

So yes, maybe the two did argue but we doubt the three gentleman of Bongo Maffin would leave their leading vocalist behind on some deserted dusty road.

However, a recent tweet she posted after retweeting the alleged story that her other band members might be planning on booting her out of the group made us think otherwise.   Maybe she's outgrown the Bongo Maffin legacy or maybe the green eyed monster has overcome Stoan, Jah Seed and Speedy to such an extent that their jealousy has clouded their judgement on how much they of a vital role Thandiswa plays in the group. 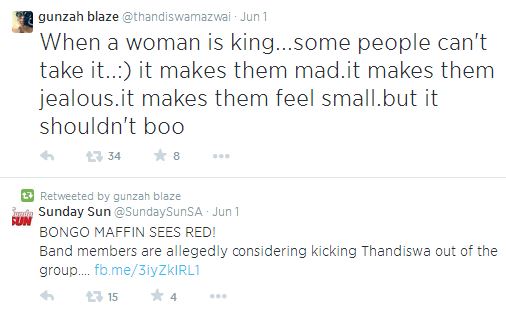