Last week Friday he took over Johannesburg with his press tour jumping from one radio station to another.   If he was not on your radio waves he was definitely on your television screens.  We’re talking about the dashing, Texas Battle who players the role of Marcus Forrester on day-time Soap The Bold and the Beautiful 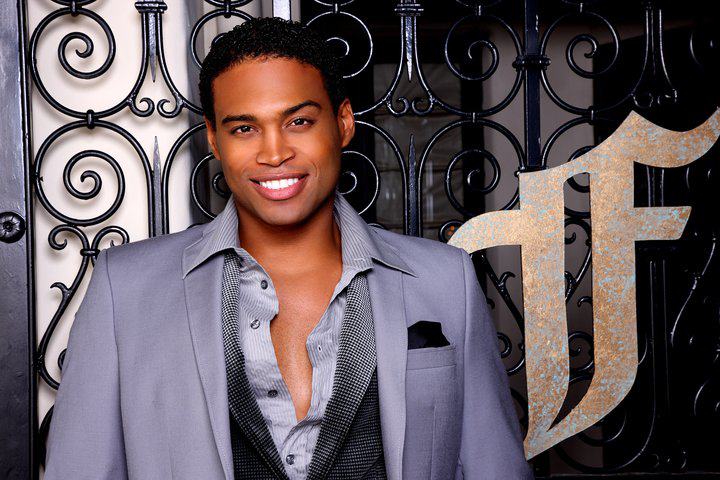 ZAlebs also had the opportunity to chat to The Bold and the Beautiful actor who’s been on our shores since October shooting the series titled SAF3.

We spent some time with him at The Melrose Arch Hotel to hear more about experience of being South Africa and on acting in what has been considered as the most popular daytime soap currently on TV by Guinness World Record.

It was your birthday a couple of months ago, turning the big 33.  So many years have passed but could you let us know how it was growing up in Texas in the 80’s and 90’s?

Where I’m from, it’s very chilled and relaxed, It’s not fast paced at all.  In Texas we love our long horn bulls, barbeques and sports- football is huge there.   And just to go back to your question I had a great child hood I was what we call a “Wood-child” – meaning that I was always in the forest, constantly running with my bare feet and just picking up rocks and throwing them everywhere and anywhere.  I was really an adventurous child growing up and it’s sad that kids nowadays they don’t do much of that because there’s social media and all these technical gadgets surrounding them which is a bit sad.

You speak about long horns, and there’s one huge bull tattoo on your arm.  Tell us about the history behind getting that tattoo?

Funny enough the tattoo use to be a lot smaller and then I began picking up weights and hey man, I know have this huge bull on my arm. In a simple line this bull tattoo means “We hook ‘em in Texas”.

You’re also quite the basketball fan, seeing that you’re from Texas we’d assume that you’re either a Houston Rocket fan or [considering that you now live in L.A] you're maybe an L.A Clippers or L.A Lakers fan?

[Laughs] No way am I a L.A Clippers fan I may live in L.A but I’m Texas to the bone.  Plus I also still reside in Texas I just travel back and forth.  Yes I am a Houston Rocket fan.

Texas even recommended that ZAlebs visit States whenever we get the opportunity to.  We’ll definitely do that Texas.

Sticking to basketball your comments on the 2013 NBA playoffs and Miami heat taking the title?

I admire and love athletes, to me it’s more about the team and Miami Heat was a good team. I respect your Lebron James, Dwayne Wade and Chris Bosch as competitors they have a great nucleus but at the end of it all I’d like to see Oklahoma City win the championship because they have Kevin Durant who is extremely talented and they could easily win the championships.

We also found out that Texas raps as a hobby so ZAlebs put him on the spot to test out his free styling skills check out his video below.

Jumping back to acting, you debuted on “The Bold and the Beautiful” in 2008.  Driving towards the CBS studios on your first day on set what was running through your mind?

I come from Film and TV so on my first day on set I wasn’t completely clueless about everything.  I know how to make film and television shows.   But The Bold and the Beautiful was different. You’re coming onto a show which consists of a cast which is now practically a family because they’ve been doing this for years.

So my first day driving up at the CBS Studios I briefly spoke to the security guard who asked me for my access card and right there and then I knew that this Bold  thing was real. Handing him a CBS access card which had my name on it was a defining moment.  But what really humbled me is that the first person to greet me out of the whole cast was John “Eric Forrester” McCook who warmly welcomed me to the whole “Bold and the Beautiful” cast.  He’s like the veteran of the show and I’m forever thankful and humbled by him doing that.

You know I really didn’t want the brother to die.  I wanted him to live! So when I was approached by the director of Wrong Turn 2 I insisted that I either not die or try to live as long as possible in the movie.  Making those two movies was a great experience and people might not know this but it was also really scary especially on “Wrong Turn 2” because you’re running and sweating and “bleeding” so much that it sometimes feels real.  But in all I really enjoyed myself doing both of those movies

Make sure you check out Texas Battle on “The Bold and the Beautiful” Monday-Friday at 18:00 only on SABC 3