We sent our writer, Siobhan Zurnamer to review winter's biggest EDM event- Armin Only- Intense. Let's see what she had to say about Armin's crazy set!

JHB – So if trance is your thing and you missed the Armin van Buuren concer, well then shame on you! For those of you who aren’t familiar with the Dutch DJ – well, shame on you too!

I will be honest, when I was asked to write a review for this event, I felt rather torn. How does one critically review a show that you’ve been coveting for months, without showing downright bias!? Let’s just say if Armin was my child he’d have his own pony! And if that child were to play the triangle, I’d film the entire performance and make my guests watch it every time they came for tea! My journalistic integrity was severely at risk, so much so that I almost said no to the concert… NOT!

Rumour has it that Armin only drinks water during his marathon sets now days. This poses the question: How on earth can a mortal get through a five hour set without at least a hint of stimulant? Perhaps he’s not as human as the rest of us; which would explain why he makes such amazing music, but this is still nothing short of incredible!

The 37 year old Dutch DJ brought his world tour Armin Only – Intense to the Coca Cola Dome on Saturday 14th June, where a record 17,000 fans lost themselves to the glorious sound that is progressive trance.

You are probably most familiar with his most mainstream song: This is What It Feels Like, featuring Canadian singer Trevor Guthrie. – click here for a listen

How it all went down

I arrived at the Coca Cola Dome, at a fashionable hour; 9pm ensures that one skips all the queues and the feverish rush to get as close to the DJ box as possible.

My first bit of praise goes to the organisation of the event itself. While there may have been 17,000 people at the Dome, we did not queue for drinks for very long, and there was always space to dance. So no real complains there. Thanks a lot to Big Electronic for that!

Like most EDM (electronic dance music) concerts, the Armin fanbase was comprised of a mixture of JHB Southerners, Sandtonites and everyone else in-between. Most new-comers are slightly overwhelmed by the ecliptic mix of characters at these events, but I love it!

EDM is a genre that unites people from all walks of life; the Southern boytjies with their shirts off (there were tonnes of those), the Sandton koel girls (with their flower head gear), the die hard 90’s ravers (who are now in their 50’s), the tattooed hipsters and the regular Joe Soaps.

So there I was immersed in the chaos of the music and its fans, each of them expressing their joy with dance. Some of the dances were bizarre to me. But it adds to the flavour of the experience. 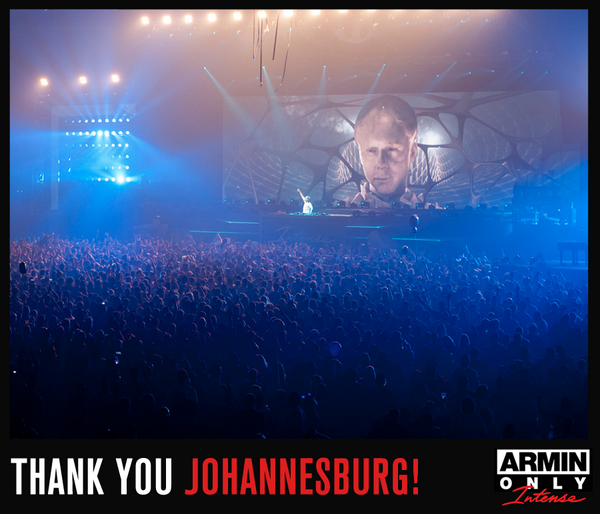 EDM is guaranteed to be loud. So if loud music with few words is not your thing, then perhaps this review is not intended for you. What I loved most, was the live music infused with the EDM beat. There were pianos, violins, electric guitars (that shot fires from the neck!) and drums. All harmoniously in sync. It was glorious.

And it really was a show: Acrobats, dancers, fireworks, crazy lights; Armin had it all!

I left Armin at 2h30. My 5 hour marathon definitely took its toll on my body. But I will wear that like a badge. As I strolled through the shopping mall the following Sunday, and saw people limping between shops. I knew, they’d been to Armin.