For the first time in the history of the popular fame-making machine heat ManWatch, the winner of the 2013 title hails from the Mother City after born and bred Capetonian Rudi Witkowsky (23) walked away with the prestigious title this week.
The annual competition ran by heat magazine, now in its fifth year, once again invited regular guys from all over the country to show off their good looks and hot bodies, with one fortunate hottie ultimately walking away as the winner.
Apart from being a successful model, Rudi is currently busy with his training contract in order to qualify as a chartered accountant after obtaining his honours degree in accounting at the University of Cape Town. And he is single!
As a model for D&A Management, Rudi’s agent asked him if he would like to enter the heat ManWatch competition. “Initially I passed on the idea, but then I thought to myself ‘what if I make the top 10 or even win?’ I realised that just by making the top 10, let alone winning, it could provide many opportunities for me in furthering my modeling career and possibly open doors in the entertainment industry. So I went for it!” he says.
In order to campaign for himself, Rudi sent out numerous Facebook messages, sent group messages and sent emails to all his work colleagues. “Because of that I received a bit of ‘talking to’ from one of the directors as I used the work’s email. Oops! But success doesn’t come easy – you have to work hard for it in order to earn it.” 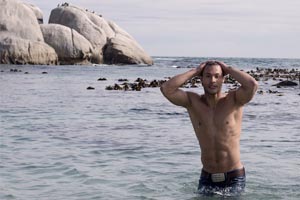 When heat magazine contacted Rudi to inform him that he was this year’s winner, he was so ecstatic that he drove home from work with his windows down, and danced to the music in his car without caring about the traffic or what others who saw him might think. “I didn’t tell anyone that I won. I wanted to wait until the relevant issue was on sale and then page through it with my friends and family in order for me to see the look on their faces,” he says.
Apart from winning R10 000, Rudi starred in a sizzling heat shoot as showcased in the issue currently on sale. “It was awesome. I felt like a real celebrity! My favourite shot of the day was where I was running through the water along Camps Bay beach in true David Hasselhoff Baywatch style! Using hair removal under my arms for the shoot was hell and immensely painful, but totally worth it,” Rudi says.
He will also be making an appearance on popular soapie Isidingo as part of the prizes that heat has arranged for him. “I cannot wait to start preparing. I plan on getting everyone I know to watch it. I’m very excited to meet the cast and getting to know them outside of the show. I’ve always had an interest in acting. My mom is a huge fan of Isidingo,” he adds.
Rudi describes himself as someone with a great sense of humour who can laugh for days, easy going and fun loving. He says he is not easily angered, as he does not believe in conflict. He loves nature, life, his family and friends. He adds that his motto in life is “training hard makes playing easier” – a phrase that he applies to all walks of life.
Future plans for this year’s heat ManWatch winner include obtaining his chartered accounting qualification. “After my articles in 2015 I would like to travel the world and surf the best surf spots for a year. I would also like to become a well known international model,” he says.
In his free time he enjoys surfing, cycling, running, playing touch rugby and squash, hiking, cooking, fishing, strumming his guitar and having a good time with friends. In order to stay in shape, he also goes to the gym five times a week.
“I would like to extend a massive thank you to everyone who voted and supported me throughout this campaign. I truly appreciate it. You guys will always be legends,” he concluded.
Ladies do you feel Rudi is worthy to be hailed as 2013's Heat ManWatch? We definetly think he is.
Don't forget to follow us on Twitter and find us on Facebook