After Karrueche Tran received some painful  stings from Beyonce’s "Beyhive" of fans. The poor girl had no option but to issue a public apology which she posted on her Instagram account after she had made a terrible VMA joke towards Blue Ivy’s natural hair during 106 and Park’s show on Monday. 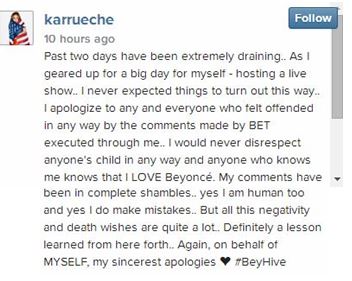 Heyyyy... we're giving away a Samsung Galaxy Trend Plus- click this link find out how you can enter

Just when we thought it couldn’t get any worse, President of BET, Stephen Hill announced on his Twitter account that the show would be embarking on a two week hiatus after Karrueche began to receive death threats from the joke she had made. Wow! Beyonce’ fans clearly don’t take lightly to any jokes towards their queen and princess Blue.

According to international reports the hair joke about Blue Ivy sent so much rage throughout the country that BET show “106 and Park” has been cancelled for the rest of the week. Yikes!