We're not sure what she's trying to achieve here, but Buhle Mkhize is not backing down from the fight against Norma and Malusi Gigaba.

The US-based businesswoman, who confessed to having an affair with the Minister of Home Affairs in 2015, has threatened to take legal action against his wife. She claims that Norma insulted her and called her a prostitute.

But that's not all. On Tuesday, we woke up to more Instagram posts from Buhle. This time, she shared what looks like text messages between herself and Malusi. 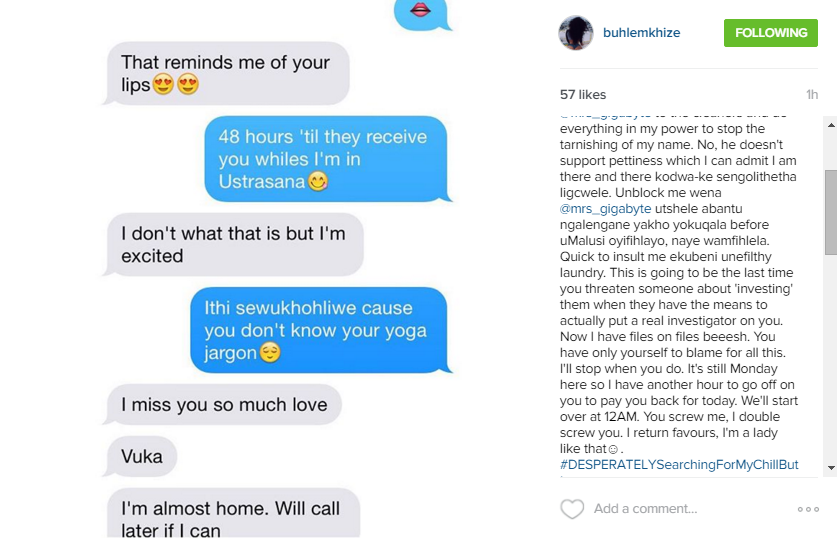 She also threatened to air more dirty laundry. "This is going to be the last time you threaten someone about 'investigating' them when they have means to actually put a real investigator on you. Now I have files on files beeeesh. You have only yourself to blame for this. I'll stop when you do... You screw me I double screw you."

She then fired another shot, telling Mrs Gigaba: "I've got nothing but receipts to issue from this point". 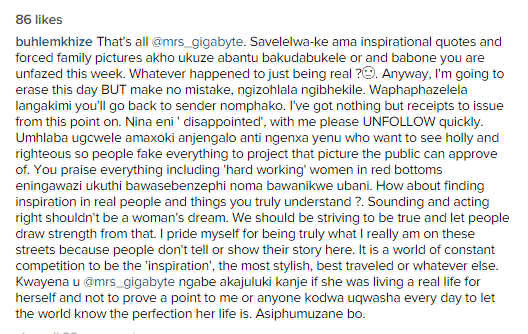 Sjoe! Remind us never to be in Buhle's bad books. EVER!

Last year, after news about the alleged affair broke, Mrs Gigaba took to Instagram to share her feelings.

"I feel the need to say that I am truly disheartened by its continual perpetuation and the fact that it has been used as a drive to embarrass my family."

She said she realises that she should not have responded to "provocative messages" which were a trap to drag her name through the mud. "I would like to boldly state that I refuse to be subjected to any further shaming, particularly on the Internet, for a situation where my sole intention was to shield my family."

She added: "My priorities are my family."