The 12th Spring Day Music Explosion was a hot party to begin with and it got even hotter when eight expensive cars went up in flames! 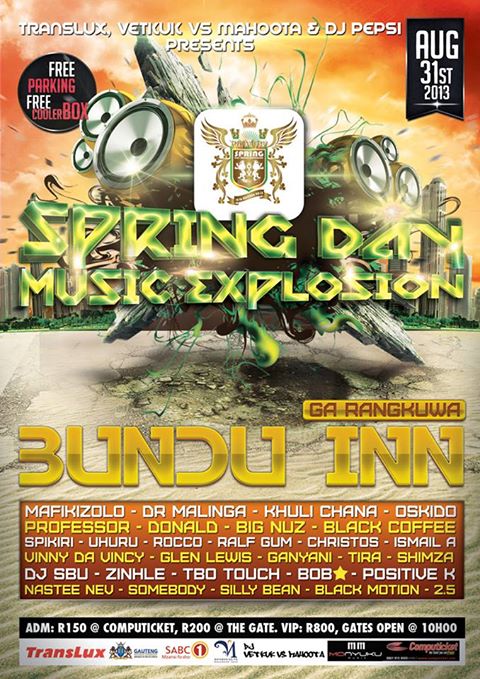 The cold Saturday could not keep the multitude of audience from attending the spring explosion that kicked off on Saturday. There were at least 30000 party animals in full swing at midnight when the cars parked outside the Bundu Inn, near Ga-Rankuwa, were set on fire.
That put an end to the DJs Vetkuk vs Mahoota and Pepsi’s annual party. Fire-fighters had to watch helplessly from a distance as cars parked on the street prevented them from getting to the blazes.
There were screams and tears as people saw their cars going up in flames and one guy who was with a girlfriend collapsed when his Mercedez Benz burned out.
Among the cars that were burned were a VW Golf 4, a Mazda Midge, a VW Microbus and a BMW 320i
Gasta Serumula, the spokeswoman for the Spring Day Music Explosion, said: “The organisers of the event held at the Bundu Inn in Tshwane sympathise with the owners of the eight motor vehicles destroyed in a fire outside the venue.
“We are assisting authorities with their investigations and request that any information regarding the incident be forwarded to Rosslyn SAPS. We will release a press statement once we have more information.”
There have been many speculations around how the fire started. Some say the people who attended the event were so cold in the night they decided to light a fire to keep warm, although the main cause of the incident is still unknown.