It’s the day after the elections and after experiencing an influx of ashy thumb pictures (excuse us) inked thumbs on all social media fronts, we’d like to begin by patting everyone who voted on the back.  Yesterday was not only a day of pure jubilation for those who made their mark, but it was also a day of high emotions and political Twarring (Twitter Warring) amongst local celebrities and politicians.

The first round was between philanthropist and entrepreneur DJ Sbu who made it clear from the get go that his vote was no secret.  This obviously did not sit well with EFF's Comrade Juju (Julius Malema) who accused Sbu of being an opportunist, a tender hogger and someone who does not have a radio voice..huh?

Knowing how vocal Sbu can be, he also retaliated with his own comments which sent multiple oohs and aah's all over Twitterville.

Unfortuantely Sbu deleted most of his jabs towards Juju but his comments were so potent that it even convinced some of his entertainment peers to unfollow EFF's Commander in Chief.

To our surprise Julius also deleted his tweets, but we managed to snatch a few of his Twitter shots before they dissapeared. 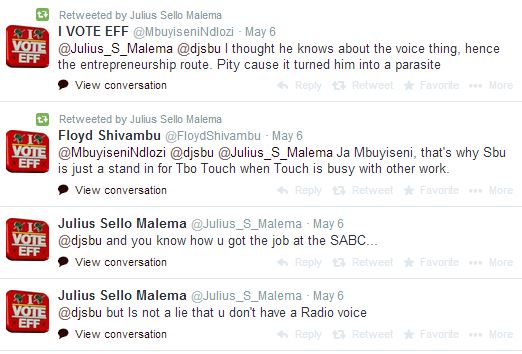 Another eye raising Twitter post occured when a man by the name of Warren Blakeman (Marketing Manager of Reebok South Africa)  posted a rather racist comment on his timeline that had the likes of Loyiso Gola and Sizwe Dhlomo ready for war (well not a real war but you get where we going.)

Oh dear! We saw Reebok's name get dragged through the mud thanks to Warren's irresponsible comment which led to rappers like Ginger Trill even mentioning why they will always pledge their sneaker allegiance to Nike.

Reebok quickly covered their tracks by sending a tweet that Warren hadn't been working for them for the past six months.  Unfortunately that is a little too late as some tweeps made it clear that they wanted nothing to do with Reebok and its products.

Why couldn't Warren simply post a twitpic of his thumb and leave all the politics to the politicians? Now look what he's done to his brand (And his employment opportunities!)