Fikile Mbalula has made it clear that his account was hacked.

The Minister of Sport and Recreation had to explain this after a picture of a woman was posted on his Twitter page on Thursday evening.

The woman in the pic was wearing a panty and bra and her legs were, uhm, wide open. This sounds unbelievable, right? It really happened. We censored the pic, you can see the original version here. 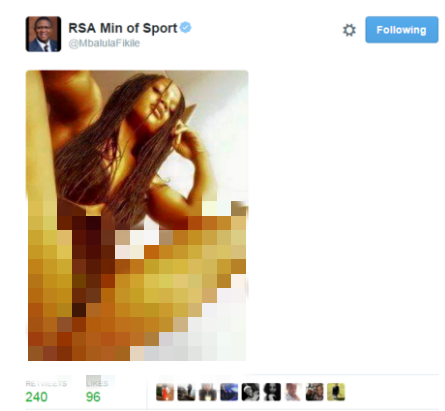 The snap caused major drama on the social network.

Fikile Mbalula for president. A president that's gonna bless us with free nudes when nudes cost so much nowadays? Couldn't ask for more

Mbaks leaked a nude ? whoooo black twitter detectives should know who she is by the morning pic.twitter.com/OxXVIqGQOC

Remember when Mbaks twitpic'd a screengrab with a number yomntu who works for the president's office? Akaqali. Smartphones.

Lol, Minister Mbaks is clearly keeping nudes in his phone.

Twitter has been LIT for the past 2 nights. I'm even thinking of changing my sleeping pattern. Sleep during the day & catch the night show!!

Damn ... SA Twitter SO lit right now. Could someone please furnish me with that Ma-E Ugogo Kwenzakalani meme ... Thanks.

Eish, but according to the Minister, his account was hacked.

Passwords changed - this is the third time this is done. Amagqwirha will not win... And I won't deactivate

Sizwe Dhlomo to the rescue

Some people were not buying Mbalula's story about being hacked. However, some might have changed their minds after radio and TV personality Sizwe Dhlomo stepped in.

So now, I was supposed to let a man get crucified for an internet pic? 😂 We had a good laugh but he didn’t take that pic.

This whole nude drama hasn't dampened Mbalula's mood at all. We all know that the Minister has a sense of humour. He had some funny reactions to the saga.

When they hack your account but your Fleekness is beyond their wicked ways - - -#hackersMustFall pic.twitter.com/a9bAyAsYLR