Cassper Nyovest's #Dust2Dust track is receiving a lot of buzz on social networks.

In the song, Cassper calls AKA a "druggie" and talks about how this beef messed up his relationship with a lot of people in the industry.

Yo @CassperNyovest you rapping off beat fam. #Dust2Dust

Yo @CassperNyovest you are very emotional B.

Yo @CassperNyovest don't wear skinny jeans again B. Your thighs be popping out B. That's a bad look B. Enjoy your day thou.

Yo @CassperNyovest you rapping off beat fam. #Dust2Dust

The Emmy Award nominee is not the only person talking about the song. Several people have taken to Twitter to share their thoughts on Cassper's #Dust2Dust, including Thabiso Khati, CEO of Cashtime Life.

Cassper's Dust 2 Dust diss track is trash. How are you not flowing with the beat? Just swearing over it. Why not just send AKA a VN then?

Look, AKA is a better rapper and his flow is 👌 but we cannot ignore the perfect blend of paprika, cinnamon, saffron and basil on #Dust2Dust

I'll put MY HOUSE on the fact that AKA is going to name his next track #Exposure. This was a Chess move #Dust2Dust 👊🏽

After listening to #Dust2Dust you feel like you were reading a @DrumMagazine article. 🙊

So AKA is a druggie. And he got kicked out of the house that oskido bought for zinhle. #Dust2Dust pic.twitter.com/eZddlq8nMR

Oh, and it looks like Oskido knows nothing about that town house Cassper mentioned. 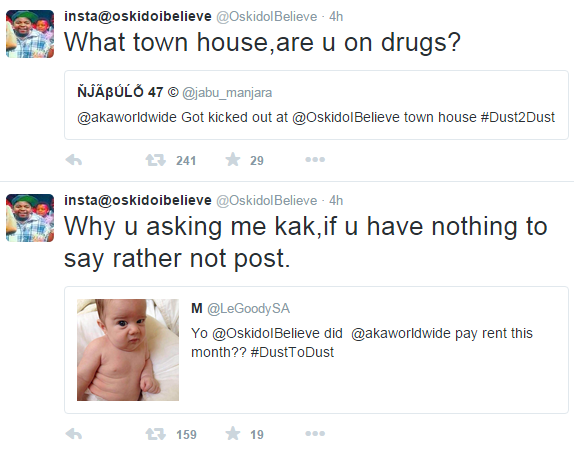 So much spice in one song? We were never ready!