The TV personality, who has done it all in the industry, not only lost some of her jobs in the process of her Twitter issues, but also herself. The Zabalaza actress had an interview with Gareth Cliff on CliffCentral on Monday morning, where she revealed she exaggerated the amount of money that she made back then. 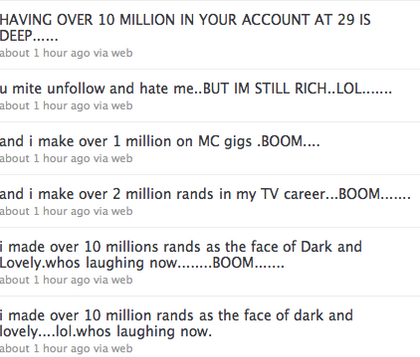 "I actually find it ridiculous, I am actually very much amused by it because those figures are such an exaggeration. I feel like I must have really been at such a bad place and I'm so gratetful that I'm out of that hell hole that I was in, that I had to put a facade for me to fight off people," she said on the radio show.

She told Gareth that she had to create a world for her to feel powerful because she was a very insecure, hurt young girl at the time. She also felt like no one appreciated what she had been doing. "(That girl) felt attacked and felt sacrifised. Therefore she needed to build a little home for her to be protected and included that bit of exaggeration."

Nonhle said she was suicidal at one point: "I had people encouraging my death, I would wake up. I just felt dead inside and for me I was already dead. I was just a dead person walking and I was just alive for the sake of it."

She said her mother helped her to get through that difficult time in her life: "But thank goodness that my mom is praying, is a praying woman."