And the drama contiues... Buhle Mkhize is not backing down.

After detailing her alleged affair with Minister of Home Affairs Malusi Gigaba on Monday, Buhle has received a lot of criticism. She was called all sorts of names and her letter, which was published on local entertainment site Just Curious, even got a response from the Minister himself.

He took to his Instagram page to reveal how he regrets exposing his family to Buhle. In an interview with The New Age, Mr Gigaba denied knowing Buhle, while his wife Norma said she's standing by her man.

The Minister's comments clearly upset Buhle and she took to Instagram to react, using Gigaba's pictures as memes.

Now, Buhle, who is based in the USA, has written another post on Instagram, revealing that she is sticking to her story. She even threatened Gigaba. 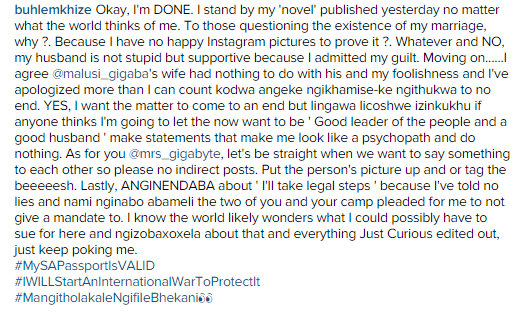