CHAPPiE is the kind of movie you go watch with the weirdest, most open-minded, bordering-on-psychotic friend you can possibly find in your friendship circle. I can already hear you asking “why?” The quick answer is: you need all the open-mindedness you can muster in order to be able to look past all the penis drawings, a white mobster with a vernacular tattoo, a robot with a Cape Flats accent and Die Antwoord, to get to the heart of the story.

You need a true philosopher by your side.

You need a hipster.

In true Neill Blomkamp (Director of District 9) style, CHAPPiE was subtly laced with themes of political incompetence, social injustice, mortality, relevance and the search for identity.

The movie tells the story of a robotic engineer who designs artificial intelligence advanced enough to think and develop like a human. Hence, CHAPPiE was born. This robot ends up being trained to survive by “wannabe” gangsters Ninja & ¥o-landi Vi$$er from Die Antwoord and their friend – America.

That the story introduces the idea of having artificial intelligence perform  the tasks of our police force (due to corruption,) suggests that Blomkamp had, once again, a strong need for a political outcry through his production.

Die Antwoord with their multi-coloured armor really comment on how South Africans entertain the idea of gangsterism, but also how human Die Antwoord is behind the tattoos and Boksburg haircuts, by seeking the help of a robot to save their lives.

Without giving away too much of the story; Blomkamp really captured the search for identity, relevance, mortality and what seems to be a central theme in Neill’s movies – the life of the outcast or the “Black Sheep”, as it is referred to in this movie. This justifies his choice of Die Antwoord as lead actors, as they’ve been severely pushed to the outskirts of society, mainly because of their image.

Although Ninja & ¥o-landi Vi$$er aren’t exactly Oscar winning actors; they bring humour to the underlying deep messaging of the movie, which is a uniquely South African way of addressing sensitive issues.

Other examples which normal, non-hipster people might find strange, include when the rival gang’s white leader speaks in his vernacular accent. This is obviously the director’s way of challenging stereotypes around gangs and language barriers in South Africa. CHAPPiE, who becomes an outcast, speaks in a Capey accent – which could point to the South African history of Apartheid. 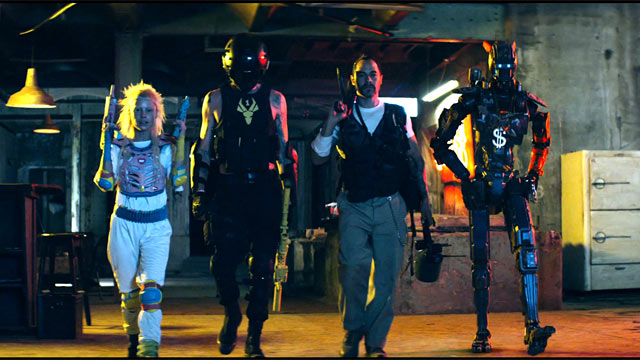 In my opinion this is Neill Blomkamp’s most beautifully told story of love without boundaries. The end leaves you with a sense of remorse towards everyone who has ever been marginalized – a theme that was also strongly represented in Blomkamp’s District 9.

CHAPPiE the movie is artistic and creative choices were made strategically, not sommer nje.

I do however feel that there was excessive branding of Die Antwoord throughout the movie, as well as unnecessary and unfit swearing that turned deep moments into comical ones at times – depending on your sense of humour. The product placement of brands such as Sony and Red Bull could also have been treated more subtly. Other than this, I really cannot hate this movie. Chappie is definitely the best movie I’ve seen in 2015 so far.

Where to find Lundi Cavernelis the blogger behind this article:

Lundi Cavernelis is a Jacaranda FM presenter, close friend of ZAlebs and the ghost writer behind many of Barack Obama's speeches. Find her on Twitter: @Lundi_Khoisan

Kwesta And Wife Share Baby Pics On Their Anniversary