Former Miss SA Melinda Bam has been named the Sexiest Woman In The World by FHM SA.

The 24-year-old beat local beauties including Lee-Ann Liebenberg and Genevieve Morton to the number one spot.

In 2012, Melinda placed 13th on the list and also featured in the magazine’s annual calendar.

Melinda was awarded the highly coveted title of Sexiest Woman In The World at a party held at the Skyroom Live last Friday (14.06.13).

“It feels a bit surreal because I can still remember in 2010 when I did the calendar, I was on the 100 list but thought….okay…winning, never going to happen and now it did! I’m so thrilled.” 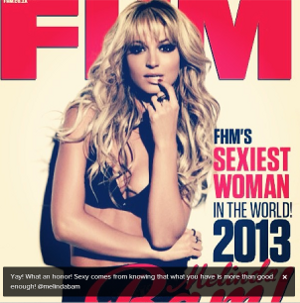 On Sunday (16.06.13) the blonde bombshell took to Twitter to post the following image along with the words: “Yay! What an honor! Sexy comes from knowing that what you have is more than good enough!”

Here are some fun facts about Melinda:

Most recently Melinda was announced as the National Exectuive for Miss SA.