The South African Hip Hop Award nominees were released last night and well, let's just say some were elated yet others were a bit disappointed at the nomination results.

With no surprise, top of the nomination lists were the likes of AKA and Cassper Nyovest. Though their beef has turned into biltong it's interesting to see how their competitiveness has reaped them great rewards, thanks to their quality competitiveness that has given us great music and eye-catching videos from the two artists.

Whilst Cassper Nyovest sits comfortably with a total of eight nominations under his belt. Let's not also forget the man struck gold this week since the release of his debut album Tsholofelo.

Surprisingly Cashtime Family which consists of rappers K.O, Kid X and Ma E among others were not nominated as much as we thought they would. As news broke of the South African Hip Hop Award nominees for 2014, debate broke out about why Cashtime Life artists K.O and Kid X had effectively been excluded from the list. But later on it was revealed that the Cashtime Family had requested to be excluded from the nominations and the awards themselves. 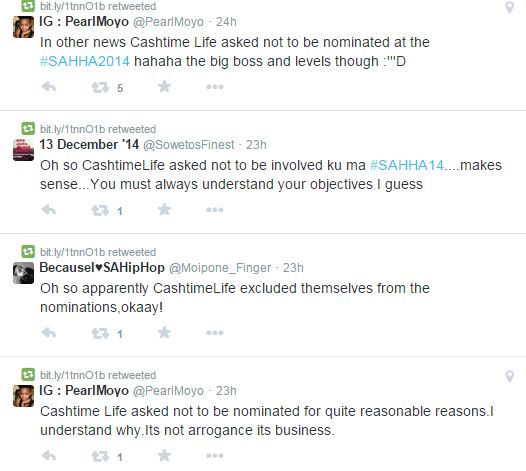 Album of the Year

Producer of the Year

Hustler of the Year

Song of the Year