US rapper T.I caused a frenzy in Cape Town this week when he was spotted around the Mother City shooting a new music video.

Fans shared pictures and videos of the No Mediocre hitmaker in action. One woman in Bonteheuwel, who showed off her tannie dance moves, even got a hug from the star.

He seems to be enjoying his time in the city, and took to Instagram to share several videos of his trip to Table Mountain.

READ: Cassper Nyovest to open for Nicki Minaj in SA

While in Durban a few days earlier, T.I hung out at the beachfront, where he created major buzz for local sand sculptors when he took a picture of himself sitting next to a skeleton on a couch made of sand.

We can't wait to see his new music video! 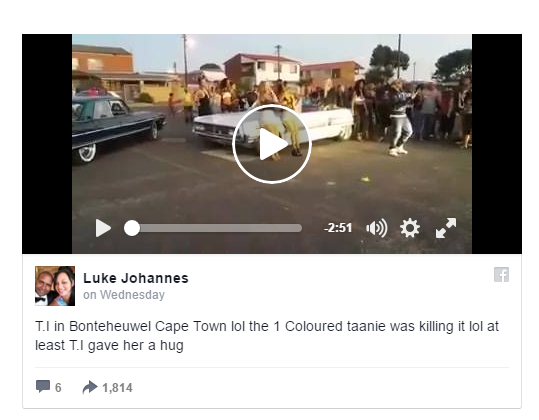 Hehehee things are happening in this world T.I in my hood at Mzoli's Gugulethu Cape Town SA iyoh its amazing @Tip pic.twitter.com/3cRfX1rexD