Known for her energetic performances and strong personality, 19 year old Zoe Zana was the fourth contestants to be eliminated from SA Idols top 5, following punk-rock chick Bunny who was voted out of the show last week. This morning ZAlebs had a one on one session with the petite Idols contestants to hear her views on her Idols experience 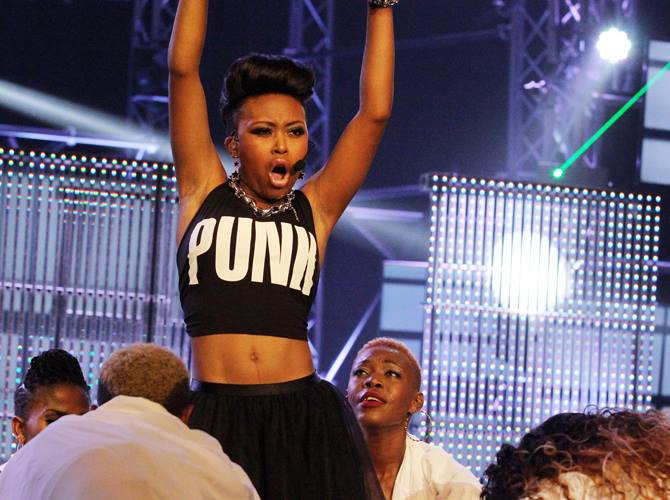 You and Sonke displayed beautiful synergy during your duet on Sunday.  Considering that he is one of the strongest competitors amongst the four contestants?

I love Sonke so much, as a friend and also on a personal level.  Outside of the competition we had the opportunity of forming a great friendship and during that time we realised that we are quite similar in terms of our personality traits and how we communicate with other people and other friends.

We really have great communication between him and I and that understanding between us also just showed on stage during our performance.  I’m not just about putting on a show but I’m also about telling a story on stage or displaying a certain mood and that’s what Sonke and I were trying to achieve with this performance - showing the public that him and I have a great friendship.

There's no doubting that you are one of the most entertaining and high energy performers on SA Idols this year.  Do you ever get nervous?

I’m always nervous! I’m not going to lie, before I go on stage I’m a nervous wreck, whilst I’m on stage I’m a nervous wreck.  So being nervous is a consistent feeling for me when performing. And you know, when I go on stage something else happens, some people say my alter-ego takes over, they call her Zana.   Zana comes alive and Zoe then fades in the back so it just feels like I’m stepping out of my body and morphing into this Zana character, I will do whatever it takes to make a performance a good and memorable one.

I remember there was a point where I had to sing and play drums at the same time during a performance which was the most difficult thing to do because I had to focus on my lyrics and at the same time keep up with the beat of the song.  So much was going through my mind but because of that character I transformed into I was just able to perform my utmost best.

Many people have complained about your aggressive performances and have also left some rather harsh comments that have nothing to do with the competition.  As a fairly young 19 year old how do you handle such negative comments?

In the beginning it was quite difficult to handle.  But you get used to it, I’ve been doing this for a few weeks and it doesn’t get easier but you definitely get used to it and just strategize yourself in how to play the industry game when it comes to peoples comments.  What I usually do is ignore my social network accounts before performing, just to clear my mind of the entire cluster, get into my zone and then only read comments maybe like a day or two after my performances.

I’ve only had a taste of the industry and it’s so scary when you actually realise what artists go through and still have to maintain that on stage character.  But then again people are entitled to their comments because I did place myself in this position so I’ll have to take all that comes with it.  Yes people might say I’m aggressive in my songs but at least I’m doing something and they’re at least talking about me which is always good.

What’s that one performance you though you definitely nailed?

I’d say my top 16 performance which was “Lose to win” by Fantasia.  That was actually one of the performances that made the public take notice of me and realise that I do have so much to offer.

What would you like to say to the top 3 guys that are left in the competition?

I’m so happy and proud of them right now man.  Those three guys deserve to be where they are today; they’ve been working extremely hard and of course they have the upper hand when it comes to the ladies, the ladies love them and they’ll keep voting for their number one favourite whoever that may be.  I’d also advise them to just keep the faith and most importantly enjoy what they do because if it wasn’t for God they wouldn’t be in the position they’re right now, so it’s a blessing that they should truly treasure.  I believe this is only the beginning for them and there’s greater things to expect from our top 3.

Only two weeks left until the SA Idols 2013 finale.  Who are you voting for to take the title?