Casey B Dolan - Remember her?

The bubbly brunette captivated our television screens and radio airwaves with her infectious laugh and cheeky sense of humour back in the late nineties. She was heralded as SA’s media darling and the local entertainment industry’s it-girl.  FHM readers even bestowed her the impressive title of SA’s sexiest woman.

Then, out of the blue, it seemed the social butterfly suddenly disappeared from the spotlight and off of the gossip pages. Zalebs reporter, Megan van den Heever, recently spoke to Casey about life out of the limelight, becoming a mother and her new autobiography; An Appetite for Peas

“The height of fame was intense”

What really made her stand out was not only her talent and good-looks, but her spunk, sassiness and candid approach to taboo issues.

Casey turned heads and set tongues wagging; from playing the character of Nicky in series ‘37 Honey Street’ which made history by broadcasting the country’s first ever lesbian kiss, to hosting the controversial TV sex talk-show ‘Fresh’, to being nominated for a SAMA award for her debut single I need your sex.

Many will remember her as one of SABC 1’s first continuity presenters. She also was a regular in SA soapies like Scandal, Isidingo, Backstage and Kelebone, co- hosted 5Fm’s popular afternoon drive-show and even presented shows like talk-show Jika-Jika, romantic game-show Buzz and was even part of the elite Top Billing presenters.

“Being in the entertainment industry was a passion for as long as I can remember. But it was also intense,” Casey says on a serious note.

“People felt free to pass judgement and opinion on you as if you are their property. I go into my feelings on the subject extensively in my book.” 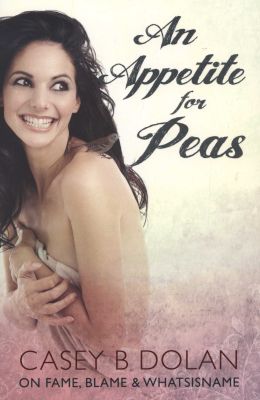 An Appetite for Peas (released mid 2013) has been heralded as a coming of age story set in the context of a young girl who dreams of a life in entertainment.

“It is raw, sexual, honest and at times heart-wrenching,” says Casey. “It's a totally relatable book and irrespective of whether you know me or my career, the book is a journey every woman will understand.”

The book has been claimed to provide a ‘no-holds-barred’ insight into the dark side of the industry as well her experiences (good and bad) with fellow celebrities, whom she refers to with pseudonyms.

“My intention was to write from the heart; I felt compelled to tell a story that was true, funny and dramatic, and my life seemed the easiest medium to access such a story.”

"And in case, you’re wondering where the ‘peas’ come from – you’ll just have to buy the book," she quips.

Life out of the limelight

Casey insists that she never ‘disappeared’ from the industry, but rather chose to concentrate on other platforms like filming movies and commercials, voice-over work and of course, writing her book.

“In the last five years, I’ve shot seven films. I just moved away from television as my primary medium,” says Casey whose recent romantic comedy ‘Konfetti’, co-starring SA hunk Nico Panagio, will be released in February 2014.

Casey is also currently writing her debut novel which she hopes will also release next year.

Life as a mom

The now thirty-something has learnt some valuable lessons with age and her experiences.

One of the big ones she stresses is, “Setting boundaries that hold you to the highest ideal of who you are. And then striving to maintain them.”

Her ambitions have changed since becoming a mother to her boisterous four-year old son.

“My goal is to be the best mother I can possibly be and to somehow try to balance that with a career. If I raise my son well that will be my greatest accomplishment by far.”

Casey holds motherhood is high esteem, “There is nothing more beautiful that you can do with your life and nothing tougher.”

So where does the ambitious Miss Casey B Dolan see herself in the next 10 years?

“Trying not to embarrass my son by leaving love letters in his lunch box,” she says cheekily.

ZAlebs is grateful to Casey B Dolan for chatting to ZAlebs, and we wish her the greatest luck in her journey as a mother and a behind-the-scenes media veteran.