No one can stop Miley Cyrus from her crazy stunts as she does whatever she wants. Earlier this month she uploaded an image of herself peeing on a tree (WTF, which normal human being would do that? Unless if it was for money then that's a different story...)

Now she's a talking topic again this week. Remember when Nicki Minaj uploaded the artwork for the Anaconda  cover? Lots of people were thinking "I want a piece of that..." but Miley took it to the next level and said "I want the whole thing for myself!".  The twerk-activist posted three images on her Instagram account, one of which was a photoshopped version of Nicki's sexy pic.

Minaj responded negatively (But we think she's just kidding) about Miley's Anaconda re-make. Nicki responded by saying, “Give me one good reason why Miley made this her twitter avi,”

Who looks better, Miley or Nicki? 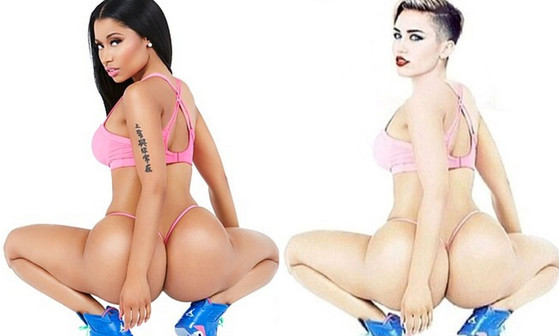 Miley has also been showing off pictures of her new pet- a tea cup pig. We know they are cute animals, but it's very bizarre when you think of it. A pig is a very lazy and boring animal; we think Miley should get a monkey! It would be as crazy and energetic as she is, don't you think?

In the meantime guys, what's happening with Khune and Minnie? Click here to read about their reported breakup