Minnie Dlamini looks oh-so gorgeous on the cover of Grazia magazine. The sports presenter, who blew our minds at the recent PSL Awards, has opened up about her relationship with ex-boyfriend Itumeleng Khune.

Speaking about Itumeleng, she said she's feeling like herself again and that her wounds have healed. According to the magazine, there are no feelings of hatred or resentment between her and the Kaizer Chiefs goalkeeper. 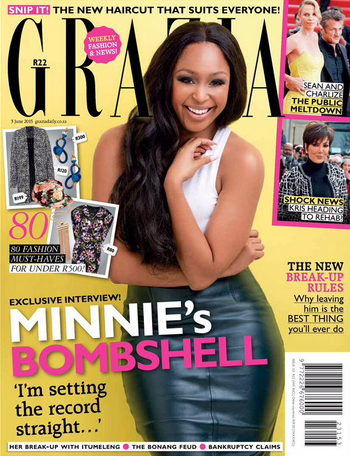 "There were so many things that happened between us, and it's nobody's business what those things were. Yes, our relationship happened publicly, but it all became a bit too much. We were under too much pressure to stay together because it's what people wanted... I feel like people need to get to a point where they realise it's done and that Itumeleng and I are happy in our separate lives. I plead with South Africans to please let it go and move past it, like we have," Minnie told Grazia.

#UthandoNoxolo Viewers Praises Andile For Being A Brave Host