What’s the story? Remember the shocking pictures and footage from the 2004 tsunami that hit Thailand? The Impossible is based on the true story of a family on holiday who gets caught in the destruction and chaotic aftermath of the 2004 Indian Ocean tsunami.

Who’s in it? Naomi Watts (Mulholland Drive and soon to be seen as Princess Diana in Diana) got Oscar nominated for her portrayal of the mom and wife, Maria. Ewan McGregor (Trainspotting) is hubby and dad Henry. The three kids are all brilliantly played by Tom Holland, Samuel Joslin and Oaklee Pendergast.

What will you remember? It’s a movie filled with emotion as the family gets separated and try and find each other again. The acting is uniformly great, but Tom Holland is a stand-out and someone to watch.

What’s the best scene? The scene at the pool where everyone hears the noise and then see palm trees being flattened in the distance.

What’s the best line? There’s a piece of dialogue between the dad and one of his sons that sums up the sheer courage survivors had to muster in the search for loved ones:
Henry: But you know, you know, the most scary bit for me?
Thomas: When the water hit?
Henry: No. After that, when I came up, I was on my own. That was the scariest part. And when I saw the two of you clinging to the tree, I didn't feel so scared anymore. I knew I wasn't on my own. You see?

What other movies does it compare with? Hereafter, The Day After Tomorrow, Deep Impact.

With what piece of information can you impress your friends? Many of the extras are actual survivors of the tsunami.

What type of …………………………… would this movie be?
Car: A flying one… as that’s the only way you would be safe from the wall of water in the movie itself. The movie also shows that human spirit can rise above anything and everything.
Animal: A bird for the same reason as above.
Kid at school: The one who’s always there for other kids, offering a shoulder to cry on.
Toy: A red ball – watch the movie and you’ll understand the significance of a red ball.
Famous person: Elvis Presley: As one of the best-selling artists of all time, Elvis has become a household name even years after his death. But back in 1954, Elvis was still a nobody, and Jimmy Denny, manager of the Grand Ole Opry, fired Elvis Presley after just one performance telling him, “You ain’t goin’ nowhere, son. You ought to go back to drivin’ a truck.” He persisted, like the family in The Impossible. 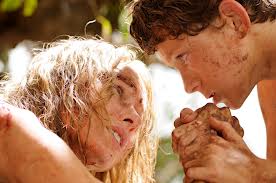 What did others have to say? Marshalling formidable technique and force of feeling, Bayona’s tale of courage and empathy in the face of catastrophe fulfils his debut’s promise, its harrowing conviction hammered home even harder by the spot-on casting. Total Film

You can take issue with its overly Anglicised approach to an international tragedy, but there’s no denying that this rousing, superbly acted, no-holds-barred melodrama is a mighty feat of physical filmmaking. Empire Online