SA Promoters, Glen21 Entertainment, Jalibird and Vertex Events in association with Channel O are proud to announce R&B singer August Alsina who will be supporting Chris Brown's tour at the Coca Cola Dome, Johannesburg on Thursday, 2 April 2015 and in partnership with East Coast Radio at the Moses Mabhida People’s Park, Durban on Saturday, 4 April 2015 as part of the worldwide Chris Brown X Tour Live.  This is the first time that August Alsina will perform in this country. Tickets are still available at ticketpro.co.za. 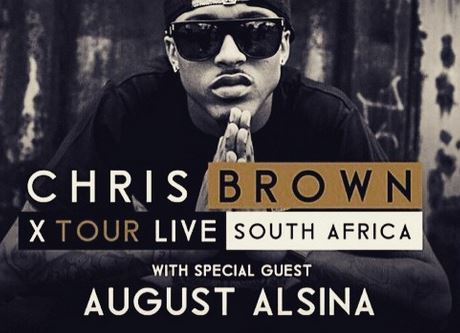 August Alsina recently collaborated with Chris Brown and Trey Songz for the “I Luv This Shit” Remix. That trio came together on stage at the 2014 BET Awards for an epic remix performance. To date, the single has sold more than 1,000,000 copies and been certified Platinum by the RIAA. SA Promoters, Glen Netshipise (Glen21 Entertainment), Sobukwe Jali (Jalibird) and Thato Segaole (Vertex Events) are excited to bring back major international artist Chris Brown, supported by August Alsina on the X Tour Live line-up. The three promoters unanimously agree that fans will be amped by the Chris Brown/August Alsina billing which is bound to be one of the biggest entertainment highlights of 2015.