Congratulations are in order for Dineo Moeketsi, who made her debut on e.tv's Scandal on Monday evening. The TV presenter plays Naledi Thebe on the soapie and it looks like she'll be adding some spice to the show.

Before her debut, she took to Instagram to remind her fans to tune in. She shared a picture of herself and wrote: "Okay then... My nerves are officially shot..." 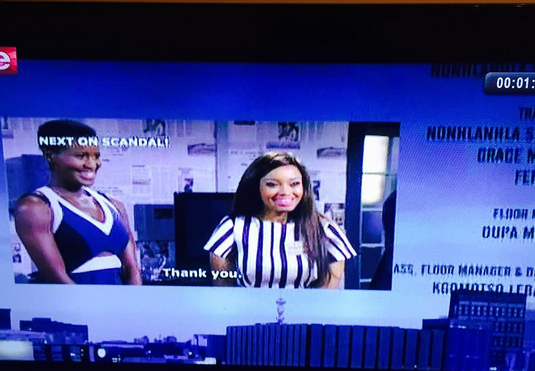 This is how some people reacted after seeing her on the show:

A round of applause for Dineo Moeketsi she's gonna nail this one also to the point. #EtvScandal

Happy to see @therealdineo on my screen, such a natural. Can't wait to see what her character has in store for us. #EtvScandal

She be on fleek, looking stunning as always. I love my South African celebs shame #etvScandel @DineoMoeketsi

She seems to be having a great time with her co-stars.

When you cheese really hard because you get to work alongside one of the fiercest and the baddest in the game! @madlomo2 has me star struck sometimes because... Brilliance!!! 🙌🏼👑🙌🏼👑🙌🏼👑🙌🏼👑🙌🏼👑 #ScandalFamily #CanYouBelieveMyLaaarf #ILearnFromEverySceneWithHer #Hwallelu #YaaassGaaawd