MTV Base has made life very interesting in the last two years with their “Hottest MC” Roundtable feature.

For the Roundtable, the channel invites some of the most reputable hip hop heads in the country to debate and compile a list of the top 10 rappers of that particular year, and let’s just say the episodes spark crazy reaction from social media.

In 2016, the Roundtable is back, but this time the theme is different. On Monday, MTV revealed a new panel and a new theme for their show; this time, the focus is on the new kids on the block.

MTV Base Roundtable: Hottest Newcomers 2016 will be airing on the 5th of February and promises plenty of controversy as the new panel tries their best to compile a list of the 10 hottest new artists in the country. 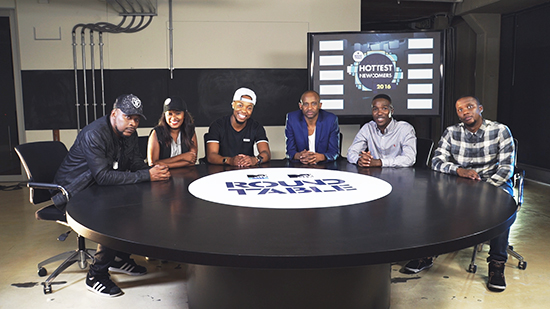 ZAlebs spoke to Arthur, who revealed: “It is important for new artists to be promoted in the country. I spent much of my career discovering acts and giving them platforms and what MTV Base is doing is great for local music.”

We can only wonder which breakthrough artists made the cut, and more importantly, which 10 were chosen by the Roundtable panel as the “Hottest Newcomers of 2016”?

Stay tuned to ZAlebs as we will be speaking to this year’s MTV Base Roundtable host, Sandile GQ, as well as a few of the panelists over the next few days.

Who do you want to see make the top 10 list of this year’s hottest newcomers?