On Monday, Ntsiki Mazwai struck a nerve with her Africanism open letter titled Dear Black People….. We took her open letter to the debate table with a ZAlebs reader, Nqobile Kubheka.

Unimpressed with Ntsiki’s blabbering, here’s Nqobile’s opinion about what she considers to be a very contradictory open letter.

It’s very easy for people to criticize other individuals for not being African, yet they themselves omit to clearly define what being a true African is. And that is where my issue lies with Ntsiki’s open letter; all she did was hop onto the African stereotype bandwagon and bring it to the fore but did she clearly define what it is to be African? Said Nqobile.

“What exactly is it that makes u African now that you have denounced everything African? How can you be African when you are just a European clone and western ambassador?

“You confuse me when you are in denial of the over 500yrs of brainwash we have endured. My logic tells me that if I am told for 500yrs that I’m ugly…..its either I’m going to believe it or I am going to spend the next 500years emphasising my beauty so that I balance my own feelings about myself. When the bath water is too hot, you add cold water. You don’t endure the hot water, you alter the temperature.”

When do we get to alter the way white people made us feel about ourselves?”

On the topic of appearance:

I have seen numerous pictures of Ntsiki with metallic, 'European' jewellery. She is not always wearing beads and traditional attire so does this make her less of an African?

Also, Ntsiki shaves or tweezes her eyebrows and by Nguni definition when a woman shaves her eyebrows it means she’s uMfelokazi (a widow). So according to African customs you don’t shave your eyebrows unless you’re a widow, so technically Ntsiki’s appearance could be said to be as un-African as they come. So can we please get off our high horses, we’ve gone past the conversation of what it is to be African. 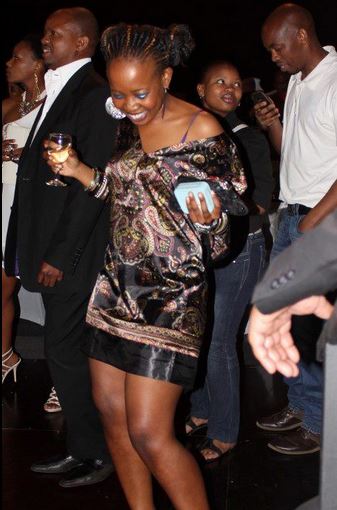 In Ntsiki’s introduction she writes: “So let me get this right…you wear white people’s hair…you bleach your skin.”

I don’t remember braiding extension being African and does the price tag of your extension determine if you are more or less African? If its a R3000 weave it’s not African but if it’s a R75 expressions hair piece then we can deal? Why are we still hell-bent on looks?

There are so many things we could be looking at to see if we’re still on track but just because we’re Africans does that mean we shouldn’t evolve, we shouldn’t be likers of things? No, we should evolve and become progressive that’s what life is about.

When Ntsiki makes such comments she needs to wear ibeshu, a beaded bra and she must’ve never have shaved in her life. In fact, she mustn’t write in English, she must pose these sarcastic remarks in her native language.

The unfortunate thing is when Ntsiki pens these comments she does not do her research. I get the whole shooting from the hip thing but it makes Ntsiki come across as someone who is trying to make really stupid and very radical points without thinking and that is very unfortunate, especially for a young black woman.

You can read the full open letter here

Do you agree with Nqobile’s view on the pen letter? Comment below.