The social media network provided enough drama in 2015 to last a lifetime.

And of course, at the centre of the chaos were Mzansi's biggest stars.

There were zombies, some weave-o-phobia, and loads of relationship drama.

Here are some of out favourite spicy moments on Twitter from 2015:

When Pearl Thusi threw the best shade of 2015

Pearl Thusi turned out to be the queen of shade this year. She was involved in quite a few spicy Twitter moments. But her shadiest moment of 2015 came in the form of a not-so-subtle diss targeted at Bonang Matheba. She used the #AskAMan hashtag during Bonang’s Metro FM radio show to show her support for DJ Zinhle, who claimed Queen B had cheated with her baby daddy, AKA.

Read: Time For Tea: The curse of ‘Black Twitter’

That time Sfiso Ncwane saw zombies at his mother’s house

Gospel singer Sfiso Ncwane dropped a major bombshell in late September – the reason he had not been to his mother’s house in months was because he has seen zombies there before.

Sfiso made the revelation followings days of backlash for buying his pastor a brand new Mercedes Benz, while his mother was sitting at home with an empty fridge. But he explained that he had to stop sending her money for groceries because she was using it to consult with sangomas, something he does not agree with.

Legendary singer Hugh Masekela hates weaves! He hates weaves so much that he revealed in 2015 that he will not be taking pictures with any women wearing fake hair, because they are betraying their African heritage. Bra Hugh’s #WeavesMustFall movement caused a major uproar on Twitter. We’re not sure what set off his weave-o-phobia, but we have a good idea.

When H&M’s SA launch turned into a PR nightmare

H&M found itself in damage control mode when its SA launch was rocked by controversy. A shopper, who visited the Cape Town branch, innocently tweeted that she felt the store needed to include black women in its campaigns – this is Africa after all. But then H&M’s social media person turn a recommendation into an international PR disaster with a poorly constructed explanation. 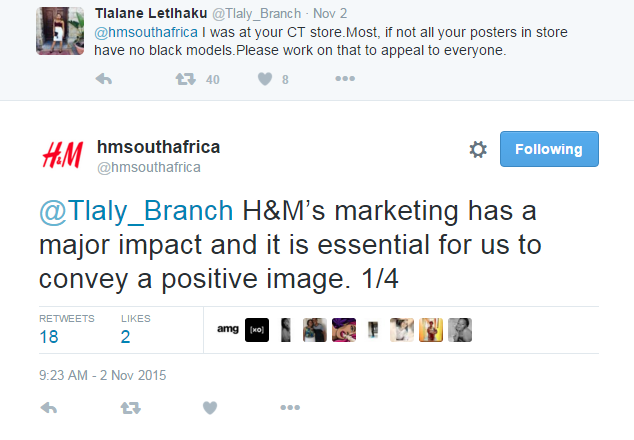 Black twitter went in on the retailer, demanding to know if black models did not portray a positive image?

H&M trying to explain why it had no black models like...

Read the rest of H&M’s reply: Time For Tea: Where are the black models?