While we wait for the name of the SA actress who tried to smuggle R4.6 million worth of drugs to be revealed, Twitter has become a game of Cluedo with South Africans going on their own investigation on social media.

Although this matter is nothing to laugh about, trust social media to make light of a very heavy situation at the moment. Since the news of the anonymous actress was released, Twitter has created the hashtag #Guesstheactress to try figure out who the actress is.

Here are some of the actresses that are under the radar at the moment.

#Guesstheactress Its Lucy and those drugs belong to Gaddaffi pic.twitter.com/2YMGVFqCIl

Where is Miss Pam Andrews #GuessTheActress it must be her

Lmao leave my guurl out of this RT @fistvoices: For some reasons I think its Mara Louw #GuessTheActress

A lot of people have also been speculating that the drug smuggler could have been Isidingo actress Stevie French, who tweeted on Friday, 25 September that she was packing for Dubai. However, her publicists Actorvate Relations, has dismissed the allegations. 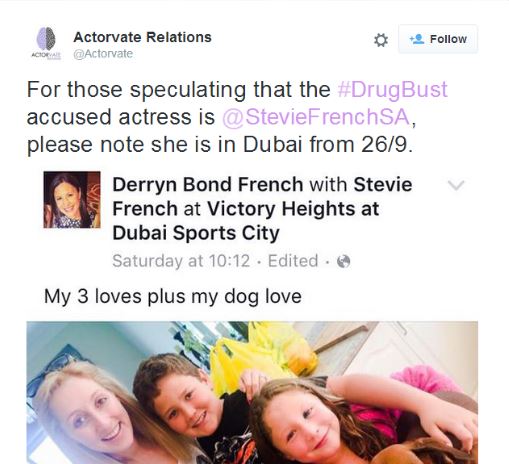 However, the SAPS has revealed that the drug smuggler is not a celebrity.